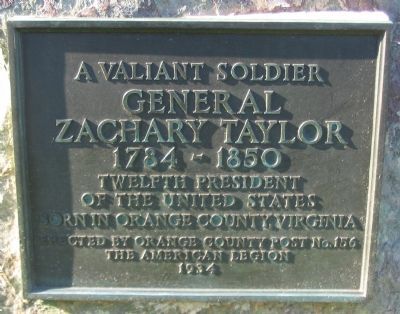 Topics and series. This historical marker is listed in these topic lists: Government & Politics • Patriots & Patriotism • War, Mexican-American. In addition, it is included in the Former U.S. Presidents: #12 Zachary Taylor series list. A significant historical year for this entry is 1934.

Other nearby markers. At least 8 other markers are within walking distance of this marker. Confederate Dead (here, next to this marker); Vietnam War Memorial (a few steps from this marker); Honoring the People of Orange County 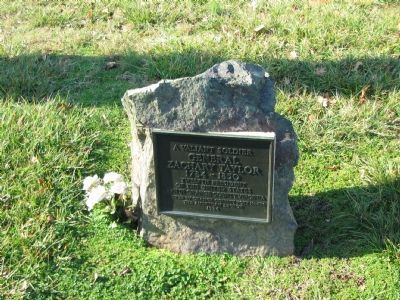 More about this marker. Taylor was born at Montabello, an estate south of the city of Orange, and the subject of another Virginia State Marker. 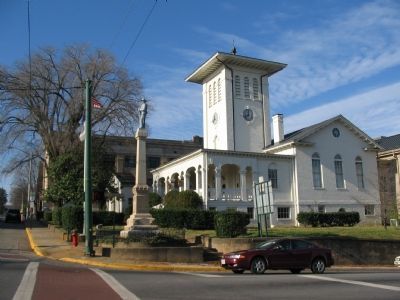 Photographed By Craig Swain, January 12, 2008
3. Marker Stone in the Courtyard
The marker stone can be seen under the shrub just to the right of the Confederate Monument on the Courtyard. 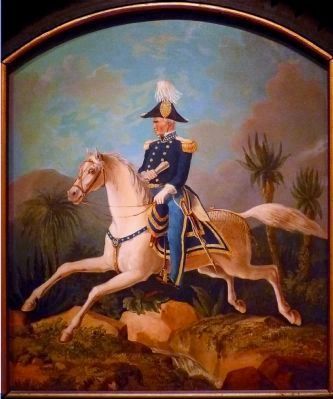 “A career army officer, by the 1840s Zachary Taylor ­‘Old Rough and Ready’ was the commanding general of the southwestern territories. With the outbreak of the Mexican American War in 1846, Taylor led a small army that achieved victories against overwhelming odds at Palo Alto and Monterrey. With victory came public acclaim, which crested when Taylor won the Battle of Buena Vista in February 1847. The Whig Party capitalized by nominating Taylor for the presidency, and he was elected in 1848. Ironically, Taylor, who had become a wealthy Louisiana planter, had opposed the annexation of Texas, knowing that expansion would reopen the slavery question. Taylor died during debate over the Compromise of 1850, the attempt to integrate the Mexican territories into the Union without disturbing the status quo on the slavery issue.” — National Portrait Gallery
Credits. This page was last revised on August 15, 2019. It was originally submitted on January 13, 2008, by Craig Swain of Leesburg, Virginia. This page has been viewed 4,765 times since then and 49 times this year. Last updated on May 11, 2015, by J. Makali Bruton of Querétaro, Mexico. Photos:   1, 2, 3. submitted on January 13, 2008, by Craig Swain of Leesburg, Virginia.   4. submitted on May 8, 2015, by Allen C. Browne of Silver Spring, Maryland. • Andrew Ruppenstein was the editor who published this page.
Share this page.