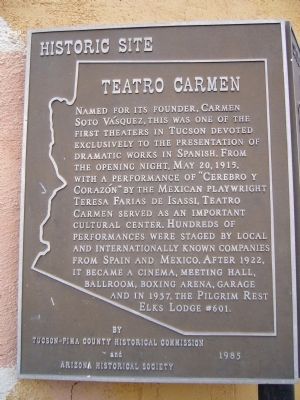 Photographed By Bill Kirchner, December 30, 2009
1. Teatro Carmen Marker
Inscription.
Named for its founder, Carmen Soto Vásquez, this was one of the first theaters in Tucson devoted exclusively to the presentation of dramatic works in Spanish. From the opening night, May 20, 1915, with a performance of "Cerebro y Corazón" by the Mexican playwright Teresa Farias de Isassi, Teatro Carmen served as an important cultural center. Hundreds of performances were staged by local and internationally known companies from Spain and Mexico. After 1922, it became a cinema, meeting hall, ballroom, boxing arena, garage and in 1937, the Pilgrim Rest Elks Lodge #601., [Spanish marker] , . This historical marker was erected in 1985 by Tucson-Pima County Historical Commission and Arizona Historical Society. It is in Tucson in Pima County Arizona