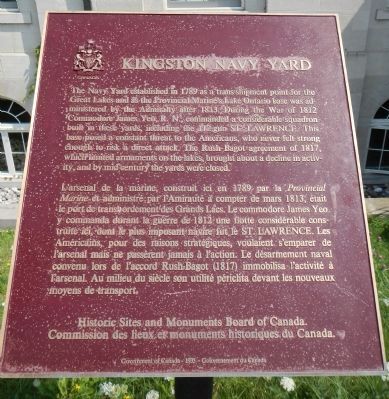 English:
The Navy Yard established in 1789 as a trans-shipment point for the Great Lakes and as the Provincial Marine's Lake Ontario base was administered by the Admiralty after 1813. During the War of 1812 Commodore James Yeo, R. N., commanded a considerable squadron built in these yards, including the 112-gun ST. LAWRENCE. This base posed a constant threat to the Americans, who never felt strong enough to risk a direct attack. The Rush-Bagot agreement of 1817, which limited armaments on the lakes, brought about a decline in activity, and by mid-century the yards were closed. 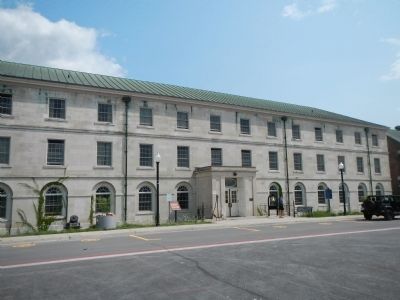 More about this marker. This marker is on the grounds of the Royal Military College of Canada in front of the Stone Frigate and east of Parade Square. 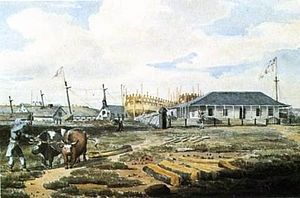 By Emeric Essex Vidal, circa 1815
3. Kingston Royal Naval Dockyard
Navy base on Lake Ontario, countering the American naval base at nearby Sackets Harbor, New York during the War of 1812. During the War, British naval operations on the Lake Ontario were centered at Point Frederick, at the confluence of the St. Lawrence and Cataraqui Rivers at Lake Ontario. In 1812, the Provincial Marine operated only four vessels armed with 20 short-barreled guns. After May 1813, when the Royal Navy units under Commodore Sir James Yeo took command of the facility, it grew rapidly. (Submitted on May 22, 2015, by Barry Swackhamer of Brentwood, California.)