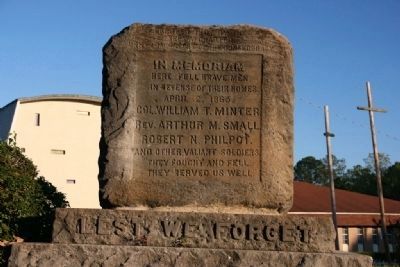 By Tim & Renda Carr, November 6, 2010
1. Defense of Selma Memorial Marker
Inscription.
Defense of Selma Memorial. . In Memoriam . Here fell brave men . in defense of their homes . April 2, 1865. . . Col. William T. Minter . Rev. Arthur M. Small . Robert N. Philpot . . and other valiant soldiers . “They fought and fell . they served us well" . . Lest We Forget . This memorial was erected in 1907 by Selma Chapter United Daughters of the Confederacy. It is in Selma in Dallas County Alabama

In Memoriam
Here fell brave men
in defense of their homes
April 2, 1865.

Erected 1907 by Selma Chapter United Daughters of the Confederacy.

Topics and series. This historical marker memorial is listed in this topic list: War, US Civil. In addition, it is included in the United Daughters of the Confederacy series list.

Location. 32° 25.61′ N, 87° 0.849′ W. Marker is in Selma, Alabama, in Dallas County. Marker is at the intersection of Range Street and 4th Avenue, on the right when traveling north on Range Street. Touch for map. Marker is in this post office area: Selma AL 36703, United States of America. Touch for directions. 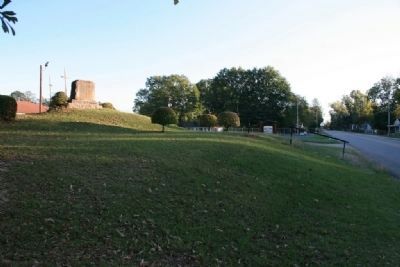 Also see . . .  Battle of Selma. CWSAC summary of the battle of Selma. The action was fought near the close of the Civil War. Confederate forces under General N.B. Forrest, including militia and volunteers, faced Federal cavalry under General James Wilson. Wilson's forces were conducting a raid through Alabama and Georgia. (Submitted on November 8, 2010, by Craig Swain of Leesburg, Virginia.)
Credits. This page was last revised on June 16, 2016. It was originally submitted on November 7, 2010, by Timothy Carr of Birmingham, Alabama. This page has been viewed 1,295 times since then and 87 times this year. Last updated on May 22, 2015, by J. Makali Bruton of Querétaro, Mexico. Photos:   1, 2. submitted on November 7, 2010, by Timothy Carr of Birmingham, Alabama. • Andrew Ruppenstein was the editor who published this page.
Share This Page.