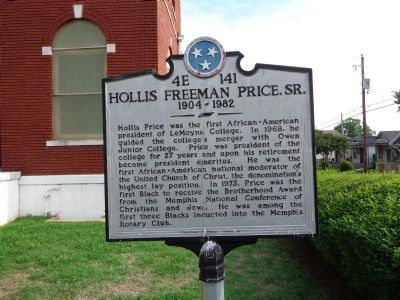 By Steve Masler, May 28, 2015
1. Hollis Freeman Price, Sr. Marker
Inscription.
Hollis Freeman Price, Sr.. Hollis Price was the first African-American president of LeMoyne College. In 1968, he guided the college's merger with Owen Junior College. Price was the president of the college for 27 years and upon his retirement became president emeritus. He was the first African-American national moderator of the United Church of Christ, the denomination's highest lay position. In 1975, Price was the first Black to receive the Brotherhood Award from the Memphis National Conference of Christians and Jews. He was among the first three Blacks inducted into the Memphis Rotary Club. . This historical marker was erected by Tennessee Historical Commission. It is in Memphis in Shelby County Tennessee

Topics and series. This historical marker is listed in these topic lists: African Americans • Churches & Religion • Civil Rights • Education. In addition, it is included in the Historically Black Colleges and Universities 🎓, and the Tennessee Historical Commission series lists. A significant historical year for this entry is 1968. 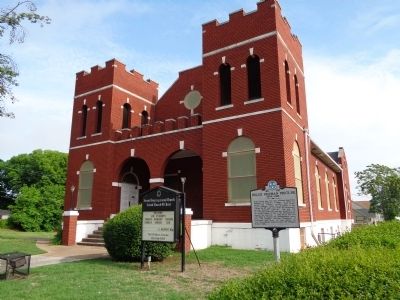 Click or scan to see
this page online
Memphis, Tennessee, in Shelby County. Marker is at the intersection of Walker Avenue and Dr. Hollis F. Price Avenue, on the right when traveling west on Walker Avenue. On the grounds of the Second Congregational Church, Memphis, TN. Touch for map. Marker is at or near this postal address: 764 Walker Avenue, Memphis TN 38126, United States of America. Touch for directions.