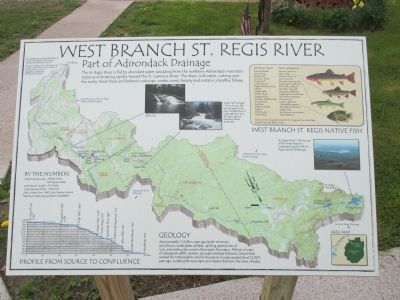 The St. Regis River is fed by abundant water cascading from the northern Adirondack mountain slopes and dropping rapidly toward the St. Lawrence River. The clean, cold water, rushing over the rocky streambeds and bedrock outcrops, creates scenic beauty and sustains a healthy fishery. 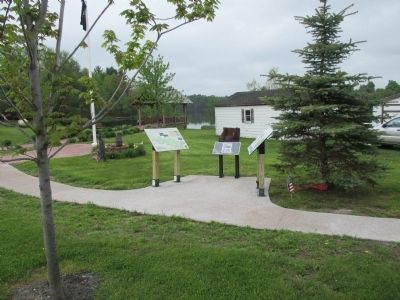 Photographed By Anton Schwarzmueller, May 17, 2015
2. Towards West Branch St. Regis River
Marker is the left of the trio.

Click or scan to see
this page online
Brown Trout.

St. Regis Pond - The Source of the West Branch is protected as part of the St. Regis Canoe Wilderness.

Sylvan Falls (Private) - One of many falls and cascades on the river, located about 7 miles upstream and 215 feet higher in elevation above Parishville. 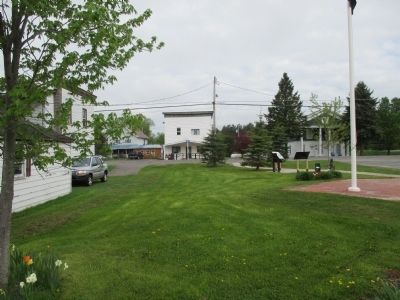 Photographed By Anton Schwarzmueller, May 17, 2015
3. Towards Main Street - NY 72
Back of marker.
that covered the metamorphic rock for thousands of years receded about 12,000 years ago, scuplting the mountains and streams that form the rivers of today.

Location. 44° 37.696′ N, 74° 48.835′ W. Marker is in Parishville, New York, in St. Lawrence County. It is in . Marker is at the intersection of Main Street (New York State Route 72) and Catherine Street, on the left when traveling west on Main Street. Touch for map. Marker is at or near this postal address: 1762 Main Street, Parishville NY 13672, United States of America. Touch for directions. 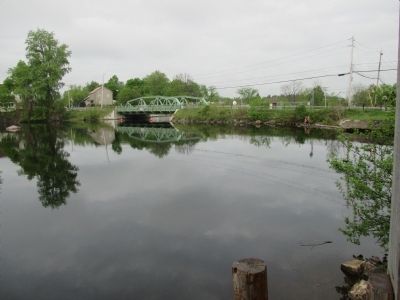