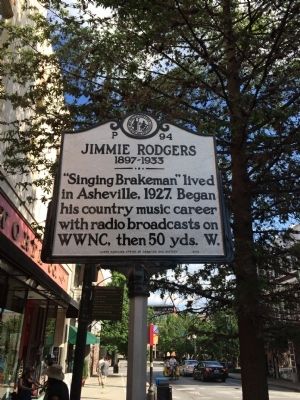 Photographed By Pat Filippone, June 21, 2015
1. Jimmie Rodgers Marker
Inscription.
Jimmie Rodgers. "Singing Brakeman" lived in Asheville, 1927. Began his country music career with radio broadcasts on WWNC, then 50 yds. W. . This historical marker was erected in 2013 by North Carolina Office of Archives and History. It is in Asheville in Buncombe County North Carolina

Topics and series. This historical marker is listed in these topic lists: Arts, Letters, Music • Communications • Entertainment. In addition, it is included in the North Carolina Division of Archives and History series list. A significant historical year for this entry is 1927.

Also see . . .  Jimmie Rodgers Day 2013 Historic Marker Unveiling Ceremony - Asheville, North Carolina. WNCmusic.org presents a video of the 2013 Jimmie Rodgers Day celebration in Asheville. Mayor Terry Bellamy read a proclamation honoring Jimmie Rodgers, Martin Anderson of WNCW spoke for a few minutes Jimmie Rodgers and his connection to Asheville, and Michael Hill of the NC Highway Historical Marker Program spoke a little bit of the marker itself and how it fit within the state's program. The unveiling of the marker occurs almost at the end of the clip. (Submitted on November 2, 2015.)
Credits. This page was last revised on June 22, 2021. It was originally submitted on June 28, 2015, by Pat Filippone of Stockton, California. This page has been viewed 548 times since then and 162 times this year. Photo   1. submitted on June 28, 2015, by Pat Filippone of Stockton, California. • Bernard Fisher was the editor who published this page.