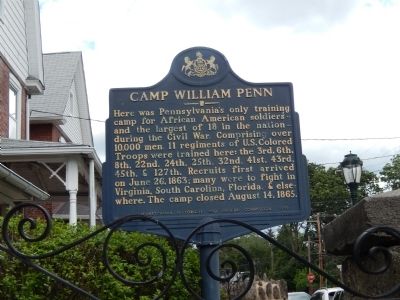 By Don Morfe, June 28, 2015
1. Camp William Penn Marker
Inscription.
Camp William Penn. . Here was Pennsylvania's only training camp for African American soldiers -- and the largest of 18 in the nation -- during the Civil War. Comprising over 10,000 men, 11 regiments of U.S. Colored Troops were trained here: the 3rd, 6th, 8th, 22nd, 24th, 25th, 32nd, 41st, 43rd, 45th and 127th. Recruits first arrived on June 26, 1863; many were to fight in Virginia, South Carolina, Florida and elsewhere. The camp closed August 14, 1865. . This historical marker was erected in 1999 by Pennsylvania Historical and Museum Commission. It is in Cheltenham Township in Montgomery County Pennsylvania

Topics and series. This historical marker is listed in these topic lists: African Americans • War, US Civil. In addition, it is included in the Pennsylvania Historical and Museum Commission series list. A significant historical date for this entry is June 26, 1863.

Location. 40° 3.982′ N, 75° 8.543′ W. Marker is in Cheltenham Township, Pennsylvania, in Montgomery County. Marker is on Sycamore Avenue south of Willow Avenue, on the right when traveling south. Touch for map. Marker is at or near this postal address: 7322 Sycamore Ave, Elkins Park PA 19027, United States of America. Touch for directions.

Other nearby markers. At least 8 other markers are within walking distance of this marker. A different marker also named Camp William Penn (about 300 feet 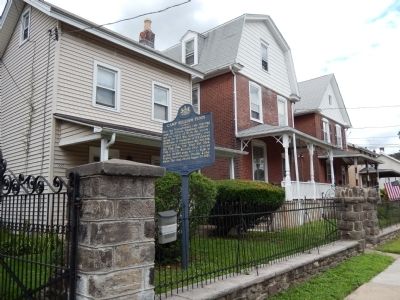 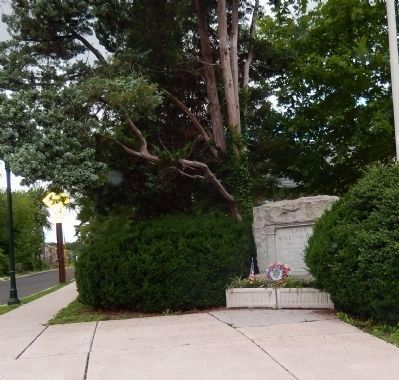