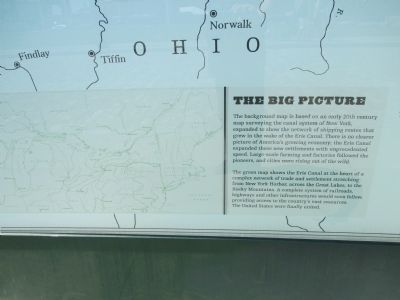 The background map is based on an early 20th century map surveying the canal system of New York, expanded to show the network of shipping routes that grew in the wake of the Erie Canal. There is no clearer picture of America's growing economy: the Erie Canal expanded these new settlements with unprecedented speed. Large-scale farming and factories followed the pioneers, and cities were rising out of the wild.

The green map shows the Erie Canal at the heart of a complex network of trade and settlement stretching from New York Harbor, across the Great Lakes, to the Rocky Mountains. A complete system of railroads, highways, and other infrastructures would soon follow, providing access to the country's vast resources. The United States were finally united.

The Western Cities. When guest speaker DeWitt Clinton turned the first spade of dirt for the construction of Cleveland's Ohio and Erie Canal in 1825, he predicted great days ahead for this muddy port at the mouth of the silted-up Cuyahoga River, pronouncing that Cleveland would gain access "...not only to the markets of New Orleans, but of Philadelphia, Baltimore, and Montreal." 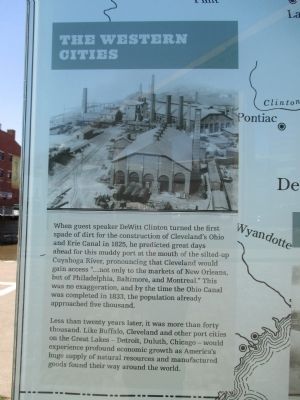 By Anton Schwarzmueller, June 3, 2015
2. The Western Cities
This was no exaggeration, and by the time the Ohio Canal was completed in 1833, the population already approached five thousand.

Less than twenty years later, it was more than forty thousand. Like Buffalo, Cleveland and other port cities on the Great Lakes - Detroit, Duluth, Chicago - would experience profound economic growth as America's huge supply of natural resources and manufactured goods found their way around the world.

The Pineries. Early 19th century America was a wilderness, with vast pine forests stretching from New England to Western Canada. Pine was the ideal wood to house America's growing population. It floated, it was light, straight-grained and easy to work, and large tracts were accessible by water for shipping around the Great Lakes or down the Mississippi. When the Erie Canal opened in 1825, it started a timber revolution. Shipping costs and distances for lumber were drastically reduced, initiating new construction on a grand scale. In addition to pine, different hardwoods were also brought to Western New York and were the basis of an important furniture manufacturing industry that remains to this day.

The World's Breadbasket. The Erie Canal opened up the large-scale agriculture of the Midwest not only to America, but to Eurpoe and the rest of the world. The timing was perfect. The large-scale conversion to industrial labor and manufacturing 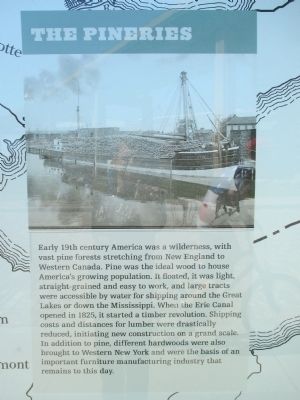 By Anton Schwarzmueller, June 3, 2015
3. The Pineries
in Eurpoe, along with a general exodus of agricultural workers to cities, was creating profound food shortages. Entire farming communities were being abandoned, and their fields lay fallow. The new factory classes needed food, lots of it, and the Erie Canal allowed the Midwest's limitless stores of grain to supply Europe's inexhaustible appetite.

This facade is reminiscent of warehouses that once lined the Commercial Slip. As the Erie Canal's terminus, Buffalo was the distribution point for much of the nation's goods. Boats were loaded and unloaded, and the neighborhood hummed day and night. There was work for thousands of laborers and craftsmen, and the city became famous for its breweries and distilleries. There were 500 taverns and gaming houses by 1850, and the abundance of ale often made for trouble (the January 7, 1856 Buffalo Daily Courier reported "2,243 arrests for last year, 1,792 of which...are chargeable to drunkenness and disorderly conduct.")

A City, and a Nation, Grow Up. Scorned by DeWitt Clinton in 1810 as a village with "...five lawyers and no church", Buffalo rose to match the prodigious economic growth generaed by 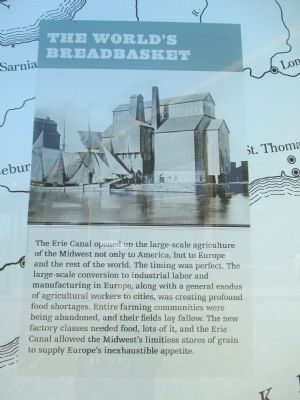 By Anton Schwarzmueller, June 3, 2015
4. The World's Breadbasket
the Erie Canal. Ballooning from 2,600 residents in 1824 to more than 40,000 in 1850, Buffalo became a fine city of promenades and shops. Other urban centers would rise along the banks of the canal just as rapidly.

The Erie Canal has shifted America's economic axis from north-south to east-west, and made New York City the nation's major port, surpassing Baltimore, Boston and New Orleans in shipping volume. And as the flood of New Englanders and European immigrants moved west, momentum shifted from the slaveholding, plantation economy of the South to the developing agricultural and manufacturing industries of the North. It was the great Westward flow, and it all passed through Buffalo.

Lockport: The Flight of Five. While the Erie Canal is ranked among the greatest engineering achievements of the 19th century, amny consider the schievement at Lockport to be the jewel of the enterprise. The five-tiered eastbound and westbound locks, cut directly into the hard stone of the Niagara Escarpment, carried canal traffic over the 60-foot rise in elevation. It was one of the sights of the age, and a city sprang up around the locks, which, although reconfigured, remain in operation to this day.

...Yearning to Breathe Free. Long before Ellis Island existed, Buffalo was one of America's major ports of immigration. Buffalo, as the western terminus of the Erie Canal, was 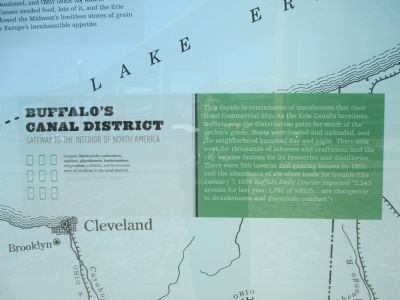 By Anton Schwarzmueller, June 3, 2015
5. Buffalo's Canal District
often the last civilized town that immigrants would encounter before departing on the lake boats towards the largely unmapped West. In the years before abolition, thousands of escaped slaves passed though the city, following the Underground Railroad north to Canada and freedom. And Buffalo and Niagara Falls were ports of entry in their own right, with thousands of legal (and illegal) immigrants arriving from Canada, Europe and Asia through what immigration officials called "the back door."

The immigrant's journey along the Erie Canal was cramped and slow, but it was also an eye-opener. They were witnessing the creation of a young country. Men and Women who, only a few years before, had been penniless immigrants themselves were working the land, starting businesses, and building factories along the banks of the canal.

Canawlers. The business of moving goods and people along the canal involved thousands of boats and their crews. In 1845, there were 4,000 boats on the canal, operated by 25,000 men, women, and children. A typical crew included a captain, a steersman, a cook, a deckhand, and hoggees, who drove the teams that pulled the canal boats.

In addition, thousands were employed to maintain and operate the canal itself, including lock tenders, toll collectors, bridge operators, surveyors, repair crews, and even bank patrolers, whose job, called the bankwatch, 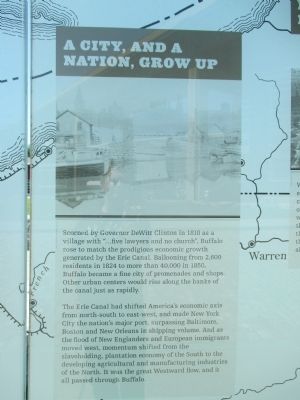 By Anton Schwarzmueller, June 3, 2015
6. A City, and a Nation, Grow Up
required a man to patrol a ten-mile stretch of canal looking for leaks and breaks in the canal bank.

Flour & Flower. Millers had long used the Upper Falls of the Genesee River to grind their grain into a high-quality flour known throughout the region, and a small village had grown up around the falls. But when the Erie Canal opened, Rochester became a boomtown.

The first ten days the canal was in operation, 40,000 barrels (3,600 tons) of flour were shipped to the markerts in New York City. Millers were soon grinding 25,000 bushels of wheat every day. Construction was constant, and by the Mid-1830s, Rochester's population was more than 14,000, with some twenty flour mills operating day and night.

BY the 1850s, however, much of the country's grain production has moved to the Great Plains, and Rochester's importance as a milling center was declining. But seeds of change were already planted. William A. Reynolds had started a small nursery and seed business in 1830; by 1850, it has become the Ellwanger & Barry Nursery Co., one of a network of Rochester seed companies that would become the largest and most famous in the world.

Rome, New York, 1817. At sunrise on July 4th, 1817, along a plain stretch of grass and trees just outside the village of Rome, a large curious crowd had gathered. All eyes were on Judge John Richardson, the canal's first signed 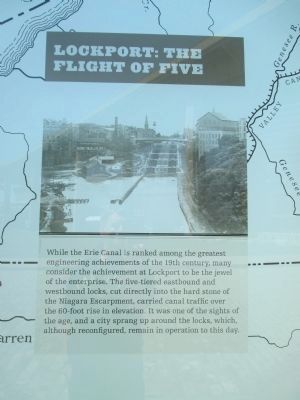 By Anton Schwarzmueller, June 3, 2015
7. Lockport: The Flight of Five
contractor, stationed behind his team of oxen, resting his hand on his plow. Canal Commissioner Samuel Young stood and made a speech, proclaiming "By this great highway, unborn millions will...hold a useful and profitable intercourse with all the maritime nations of the earth."

The cannon at the nearby Rome arsenal boomed, and Jude Richardson drove his oxen forward, inaugurating the construction of the Erie Canal. Rome, a town with an empire's name, has seen the beginning of a project that would make New York into the Empire State, and New York City into one of the greatest ports in the world.

Information Superhighway. The Erie Canal's impact spread far beyond its role in developing America's young economy, acting as a conduit of culture, civic life, and national identity for almost a century.

The canal linked together communities that, without it, would have been isolated and underserved. It wasn;t just a highway of industry: news spread along its course like an electrical surge. Along with its cargos of timber and coal, the Erie Canal carried the latest fashions, advances in education and manufacturing, and heaps of country gossip.

Much has been made of the civilizing effect of inventions like the telegraph, the telephone, and the internet on society. These innovations strengthen communities, increase individual productivity, and improve quality 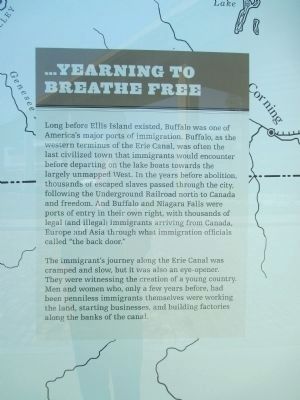 By Anton Schwarzmueller, June 3, 2015
8. ...Yearning to Breathe Free
of life and convenience. Loking at it this way, the Erie Canal could be called America's first great communications network.

A Family Affair. A typical canal boat, pulled by two horses or mules, weighs nearly fifty tons, is seventy-seven feet long by fourteen feet three inches wide, and moves through the water at a steady, lazy clip of four miles an hour or so. It is also a fully functioning mobile home. The boat captain and his family spend the majority of their lives onboard.

The smallest child sits tied to the deck so she won't fall into the water, while the oldest acts as steersman, guiding the boat along, always compensating for the sideward pull of the tow-rope upon the vessel.

The sons drive the horse or mule teams, guiding the tired beasts onto the onboard stable to 'change shifts', leading a fresh team out onto the towpath. They feed and groom the animals, and call out "Low Bridge!" at the frequent overhead crossings.

Mother and daughter are busy throughout the day, haning the washing out on lines running across the stern, meeting purveyors by the waterside, darning socks and linens, and preparing meals in the family's close, cramped quarters.

Topics and series. This historical marker is listed in these topic lists: Communications • Industry & Commerce 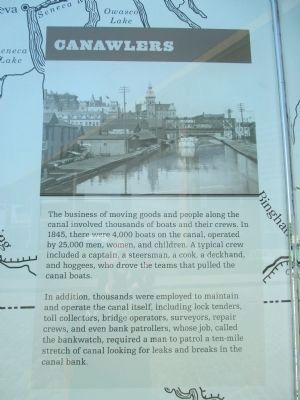 By Anton Schwarzmueller, June 3, 2015
9. Canawlers
• Waterways & Vessels. In addition, it is included in the Erie Canal series list. 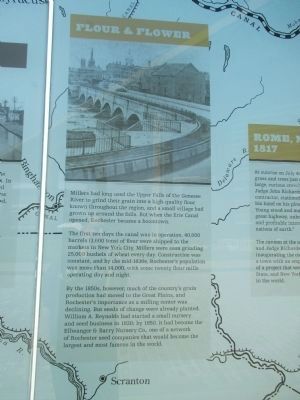 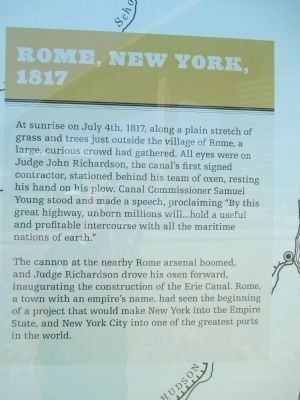 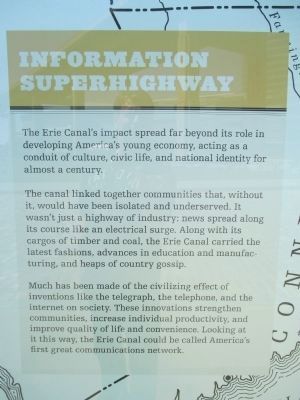 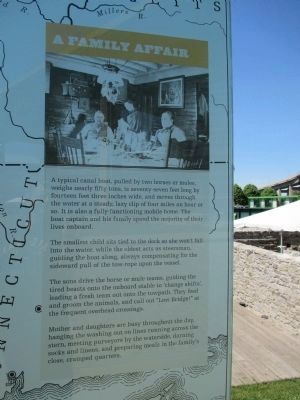 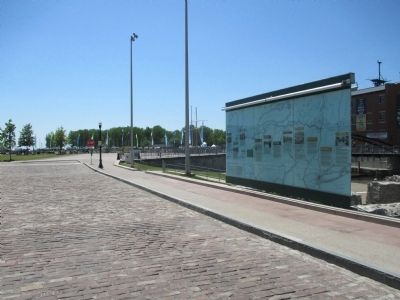 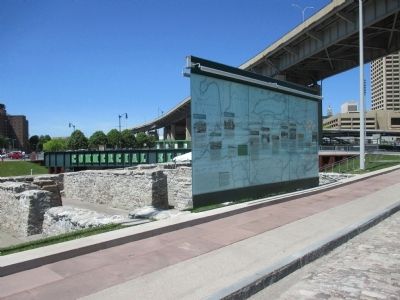 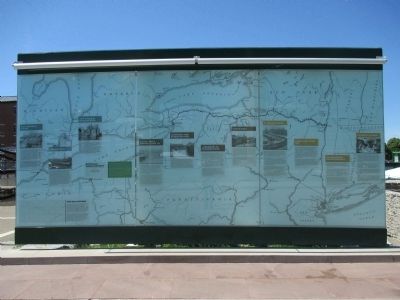 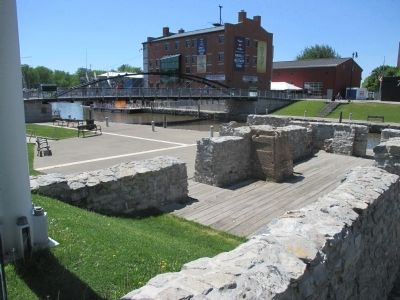