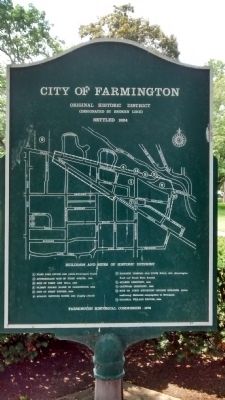 . This historical marker was erected in 1979 by Farmington Historical Commission. It is in Farmington in Oakland County Michigan

Buildings and sites of historic interest

Topics and series. This historical marker is listed in these topic lists: Cemeteries & Burial Sites • Churches & Religion • Communications • Education • Fraternal or Sororal Organizations • Industry & Commerce • Settlements & Settlers. In addition, it is included in the Quakerism series list. A significant historical year for this entry is 1825. 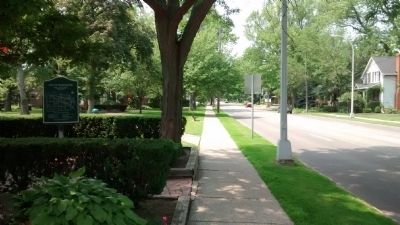 Other nearby markers. At least 8 other markers are within walking distance of this marker. First Quaker Meeting (about 300 feet away, measured in a direct line); Farmington Masonic Temple and Farmington Township Hall (about 700 feet away); Farmington's First Post Office (about 700 feet away); Gov. Fred M. Warner (about 700 feet away); Heeney-Sundquist Funeral Home, Inc. (approx. 0.2 miles away); The Village Center (approx. 0.2 miles away); Travel Through Time (approx. ¼ mile away); Methodist Episcopal Church (approx. 0.3 miles away). Touch for a list and map of all markers in Farmington.
Credits. This page was last revised on November 23, 2019. It was originally submitted on July 5, 2015, by Joel Seewald of Madison Heights, Michigan. This page has been viewed 328 times since then and 12 times this year. Photos:   1, 2. submitted on July 5, 2015, by Joel Seewald of Madison Heights, Michigan. • Andrew Ruppenstein was the editor who published this page.
Share this page.