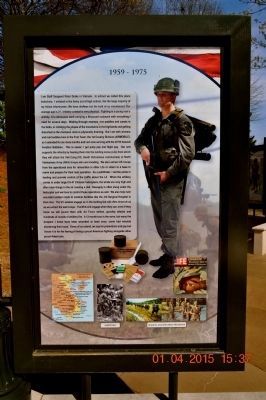 I am Staff Sergeant Peter Drake in Vietnam. In school we called this place Indochina. I enlisted in the Army out of high school, like the large majority of my fellow infantrymen. We have draftees but the bulk of us volunteered. Our average age is 21. Infantry combat is very physical. Fighting is a young man’s activity. It is strenuous work carrying a 60-pound rucksack with everything I need for several days. Wading through swamps, rice paddies, and canals in the Delta, or climbing the slopes of the mountains in the highlands and getting drenched in the monsoon rains is physically draining. But I am with winners and real buddies here in the First Team, the 1st Cavalry Division (AIRMOBILE), so I extended for six more months and I am now serving with the 227th Assault Aviation Battalion. This is easier; I get jump pay and flight pay. Our unit supports the infantry by hauling them into the landing zones (LZs) from which they will attack the Viet Cong (VC, South Vietnamese communists) or North Vietnamese Army (NVA) troops who are invading. We also extract US troops from the operational area for reinsertion 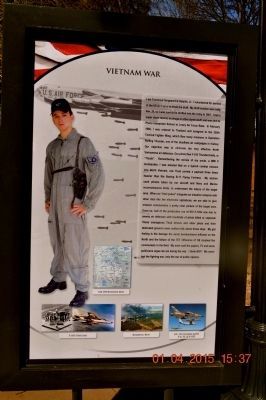 By Sandra Hughes, April 1, 2015
2. Vietnam War Marker
in other LZs or return to a base to rearm and prepare for their next operation. As a pathfinder, I aid the pilots in landing and provide control of the traffic about the LZ. When the artillery comes in under large CH-47 Chinook helicopters, the winds are very high and often blow things in the air causing a risk. Resupply is often slung under the helicopter and we have to control those operations as well. We also help rush wounded soldiers back to medical facilities like the 3rd Surgical Hospital in Bien Hoa. The VC seldom engage us in the landing but will often shoot at us as we extract the last troops. The NVA will engage when they can, even if they know we will pound them with Air Force strikes, gunship attacks and hundreds of rounds of artillery fire. A 12-month tour is the norm, but many the troopers I know have been wounded at least once, some had wounds shortening their tours. Some of us extend, we say for promotions and pay but I know it is for the feeling of being a proud American fighting alongside other proud Americans.

I am Technical Sergeant Ed Detaille, Jr. I volunteered for service in the US Air Force to avoid the draft. My draft number was really low, 35, so I was sure to be drafted into the Army in 1967. I had a super clean record, no drugs or other dumb stuff, and was sent to Photo Interpreter School at 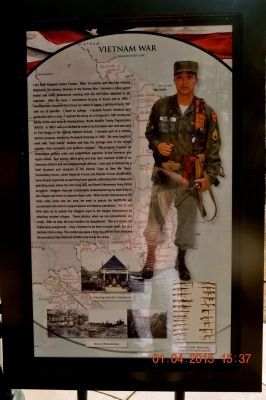 By Sandra Hughes, April 1, 2015
3. Vietnam War Marker
Lowry Air Force Base. In February 1968, I was ordered to Thailand and assigned to the 355th Tactical Fighter Wing, which flew many missions in Operation Rolling Thunder, one of the deadliest air campaigns in history. Our objective was to eliminate the very effective North Vietnamese air defenses. Our pilots flew F-105 Thunderchiefs, or “Thuds”. Remembering the stories of my uncle, a WW II bombardier, I was amazed that on a typical combat mission into North Vietnam, one Thud carried a payload three times heavier that the Boeing B-17 Flying Fortress. My section used photos taken by our aircraft and Navy and Marine reconnaissance birds, to understand the nature of the target area. When we “Intel pukes” integrate our situation analysis with other date like the electronic signatures, we are able to give mission commanders a pretty clear picture of the target area. Even so, half of the production run of 833 F-105s was lost to enemy air defenses with hundreds of pilots killed or captured. These courageous Thud drivers and other pilots and their dedicated ground crews seldom talk about those days. My gut feeling is the damage the aerial bombardment inflicted on the North and the failure of the TET Offensive of ’68 crushed the communists in the field. My mom said the papers, TV and some politicians argue we are losing the war. I think NOT! We never lost the fighting war, only the war of public opinion.

I am Staff Sergeant Isamu Tanaka. After 10 months with the 31st Infantry Regiment, 7th Infantry Division in the Korean War, I became a good patrol leader and really understood working with the KATUSAs attached to my regiment. After the truce, I volunteered to stay in Korea and in 1954, I reenlisted as a Sergeant First Class for duties in Japan. I left the Army in 1957 with my GI benefits. I went to college. I studied French literature and graduated with no job. I rejoined the Army as a Corporal in 1961 during the Berlin Crisis and went to Headquarters, North Atlantic Treaty Organization (NATO). In 1965 I was not allowed to extend my European tour and was sent to Fort Bragg to the Special Warfare School. I became part of a military advisor program, started by President Kennedy in 1962. We were taught to work with “host nation” leaders and help the average man in the village stabilize their economic and political systems. The program focused on Vietnamese military units and government agencies at the province and region levels. Our advisor effort grew and may have reached 10,000 or so American officers and noncommissioned officers. I was sent to Vietnam as a Staff Sergeant and assigned to the District Team at Bam Me Thuot. Paramilitary forces, called Regional Forces and Popular Forces (Ruff/Puffs), were already organized as part-time home guards, defending their village and patrolling areas where the Viet Cong (VC) and North Vietnamese Army (NVA) are active. However, they are considerably under-trained so my team lives in the villages and works to improve these units. When the South Vietnamese or US Army units come into our area, we work to assure the Ruff/Puffs are coordinated with them to support search and destroy operations. The VC and NVA both try to punish the villagers loyal to the Saigon Government by attacking isolated villages. These attacks, when we are outnumbered, are costly. With no help, the local leaders are slaughtered. This is a lonely and challenging assignment. I may volunteer to be here a couple years, but as a bachelor that is okay. The combat pay goes a long way and the R&R (Rest and Recuperation) trips every six months help break the stress.

Location. 34° 44.107′ N, 86° 35.324′ W. Marker is in Huntsville, Alabama, in Madison County. Memorial can be reached from the intersection of Monroe Street Northwest and Jefferson Street North, on the left when traveling east. In Veterans Memorial Park along the Patriots Walkway near the five points ditch. Touch for map. Marker is at or near this postal address: 200 Monroe Street Northwest, Huntsville AL 35801, United States of America. Touch for directions.