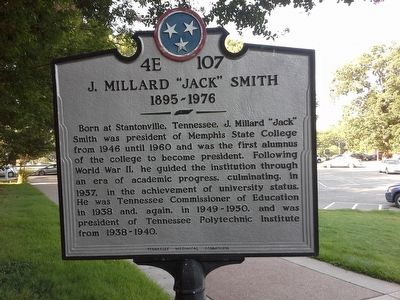 Born at Statonville, Tennessee, J. Millard "Jack" Smith was president of Memphis State College from 1946 until 1960 and was the first alumnus of the college to become president. Following World War II, he guided the institution through an era of academic progress, culminating, in 1957, in the achievement of university status. He was Tennessee Commissioner of Education in 1938 and, again, in 1949-1950, and, and was president of Tennessee Polytechnic Institute from 1938-1940

Topics and series. This historical marker is listed in this topic list: Education. In addition, it is included in the Tennessee Historical Commission series list. A significant historical year for this entry is 1946. 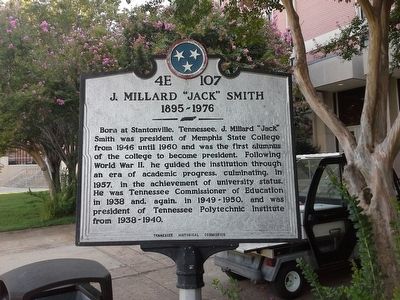 Click or scan to see
this page online
(about 300 feet away, measured in a direct line); This flagpole is dedicated to the men and women of the United States military services (about 500 feet away); Memphis State Eight (about 500 feet away); Normal Station Neighborhood (approx. ¼ mile away); The University of Memphis (approx. half a mile away); Second Presbyterian Church (approx. 0.8 miles away); William G. Leftwich, Jr. Memorial (approx. 0.9 miles away). Touch for a list and map of all markers in Memphis.

Additional commentary.
1.
In 1957, civil rights activists Laurie Sugarmon and Maxine Smith decided to apply at Memphis State University. Both women were African American and the University had never admitted a black student. Sugarmon had graduated from Wellesley and Smith already had a Master's Degree. Both women were turned away from the admissions office and demanded to see the president, J. Millard Smith, the subject of this marker. "Not only were blacks, according to President Smith, never to be allowed in a white institution of higher education, which was the doorway to economic and social opportunity, but 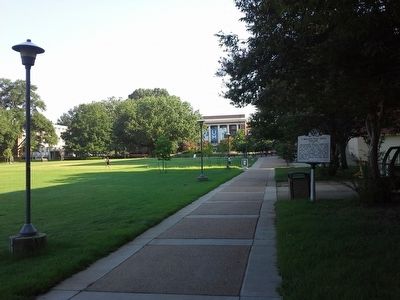 "No blacks shall be admitted as long as I'm president."
J. Millard "Jack Smith" Smith