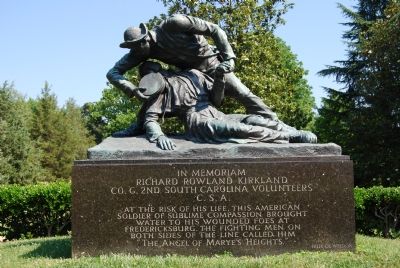 Photographed By Dawn Bowen, June 12, 2007
1. Kirkland Monument
Bronze by Felix George Weihs De Weldon (1907–2003), sculptor. Sculpture approx. 5½ ft. x 8¼ ft. x 4¾ ft.; granite base approx. 3¼ ft. x 9 ft. x 5½ ft.
Inscription.
Kirkland Monument. . In memoriam . Richard Rowland Kirkland . Co. G, 2nd South Carolina Volunteers . C.S.A. , At the risk of his life, this American soldier of sublime compassion, brought water to his wounded foes at Fredericksburg. The fighting men on both sides of the line called him “The Angel of Marye’s Heights.” , Born Kershaw County, S.C., August, 1843 . Sergeant at Fredericksburg, December 1862 . Lieutenant at Gettysburg, July, 1863 . Killed in action at Chickamauga, September 1863. , Dedicated to National Unity and the Brotherhood of Man. . This monument was erected in 1965 by The State of South Carolina, The Commonwealth of Virginia, Collateral Descendents of Richard Kirkland, and Citizens of the United States. Dr. Richard Nunn Canier, Executive Director of the Richard Rowland Kirkland Memorial Foundation. It is in Fredericksburg Virginia

At the risk of his life, this American soldier of sublime compassion, brought water to his wounded foes at Fredericksburg. The fighting men on both sides of the line called him “The Angel of Marye’s Heights.”

Dedicated to National Unity and the Brotherhood of Man.

Erected 1965 by The State of South Carolina, The Commonwealth of Virginia, Collateral Descendents of Richard Kirkland, and Citizens of the United States. Dr. Richard Nunn Canier, Executive Director of the Richard Rowland Kirkland Memorial Foundation.

Topics. This historical marker and monument is listed in this topic list: War, US Civil. A significant historical year for this entry is 1843. 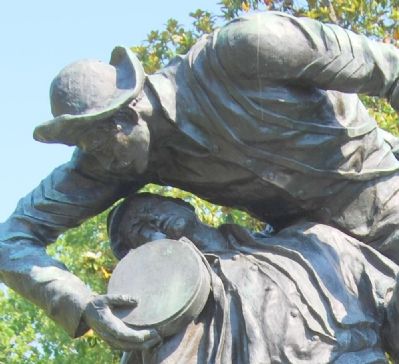 Click or scan to see
this page online
of Sunken Road (pathway) and Mercer Street. Touch for map. Marker is in this post office area: Fredericksburg VA 22401, United States of America. Touch for directions.

3. Experts battle over story of Marye's Heights ‘Angel’. Article by Kevin Kirkland in Fredericksburg’s The Free Lance-Star. “Schaffner says Kershaw’s account is essentially a children’s story that not only trivializes the horror of Civil War battle, but does a disservice to soldiers such as Kirkland. He knows it’s an unpopular stance. ‘It’s a little like shooting down Santa with a Stinger missile on Christmas Eve,’ he said.” 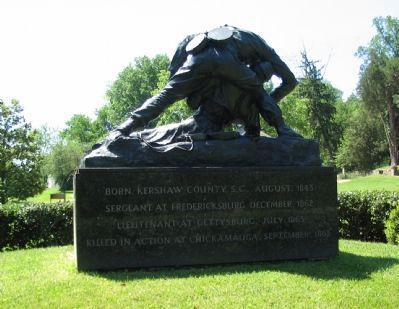 Additional commentary.
1. Story of a Carolinian Who Won the Gratitude of Yankee Foes
This short account has been attributed to a 1908 article in the Philadelphia Ledger and may have been reprinted the same year in the Camden (S.C.) Chronicle.

Richard Kirkland of South Carolina could trace his lineage to colonial days. He was quite a young man when the South seceded, and he became a soldier under the Stars and Bars. At the battle of Fredericksburg, it was in December he proved himself a hero.

Through the long winter night he heard the moans and cries of the Union wounded. Gen. Kershaw, the Confederate general, was approached and saluted by this young sergeant who said: “I cannot stand it, all night long the Yankee wounded have been crying for water. With your permission I will succor them.” The general explained that no truce existed between the contending forces. Sergeant Kirkland requested the privilege of displaying a white handkerchief, but the general would not permit it. Finally this brave American said: “With your permission, I will cross the field unarmed and without the display of white, climb over the parapet and give those wounded Yankees water.” 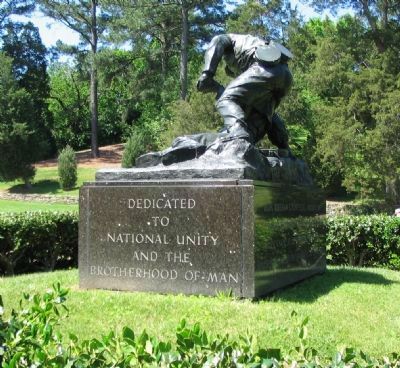 Photographed By Craig Swain, May 25, 2008
4. Side Panel
The general could not resist that brave magnanimous spirit and said “Sergeant, the enemy is behind yonder redoubts with guns ready to have you forfeit your life, but if you will, go and may God protect you.” With a bound he was off.

The Union troops were amazed at his intrepidity and when they noticed him raise the wounded and nourish them they broke into cheers and after several hours of service he returned unharmed to his station to later lose his earthly life at Chickamauga by a bullet, saying to a companion: “Tell father I die doing my duty.”

His dust reposes in a little country graveyard in South Carolina, a weather beaten board at the head of his grave giving his name. Sergeant Richard Kirkland is not seen as a “Reb” but a hero. Possibly some who read this may have lain that bleak December day upon the battlefield and been succored by him and this incident, along with the knowledge of his soldier’s death and his almost unmarked grave, may induce them to start a movement for a monument to him, either where buried or in the Capitol of our country, and with suitable inscription thereon relative to his unselfishness of service, to have his heroism inspire all readers.
— Submitted June 12, 2007, by J. J. Prats of Powell, Ohio. 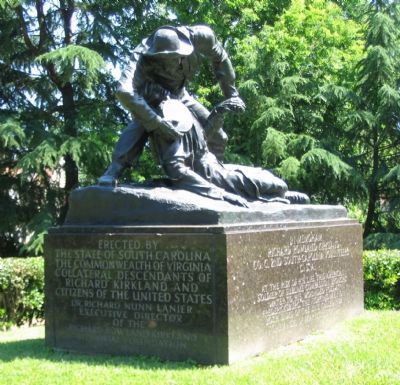 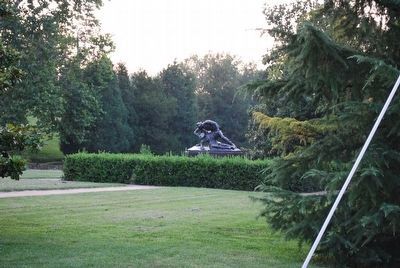