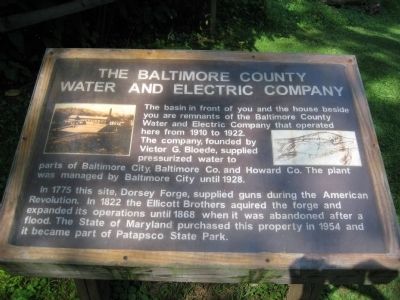 The basin in front of you and the house beside you are remnants of the Baltimore County Water and Electric Company that operated here from 1910 to 1922. the company, founded by Victor G. Bloede, supplied pressurized water to parts of Baltimore city, Baltimore Co. and Howard Co. The plant was managed by Baltimore City until 1928.

In 1775 this site, Dorsey Forge, supplied guns during the American Revolution. In 1822 the Ellicott Brothers acquired the forge and expanded its operations until 1868 when it was abandoned after a flood. The State of Maryland purchased this property in 1954 and it became part of Patapsco State Park.

Topics. This historical marker is listed in these topic lists: Charity & Public Work • Industry & Commerce • War, US Revolutionary. A significant historical year for this entry is 1910.

Location. 39° 13.645′ N, 76° 43.199′ W. Marker is in Avalon, Maryland, in Baltimore County. Marker can be reached from the intersection of Washington Boulevard (U.S. 1) and South Street. Marker is within the Patapsco Valley State Park - Avalon area, on the northern side of the Patapsco 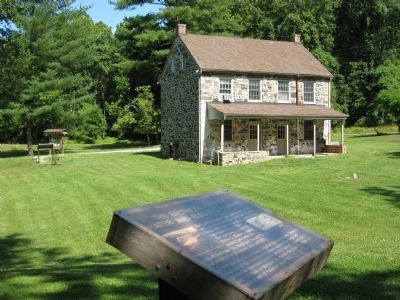 Click or scan to see
this page online
River. Marker is a few yards beyond the Avalon Visitor Center building which is just under 1 mile from the park gate building. Entrance to PVSP is about 300 feet north of the US 1 - South Street intersection. Touch for map. Marker is in this post office area: Halethorpe MD 21227, United States of America. Touch for directions. 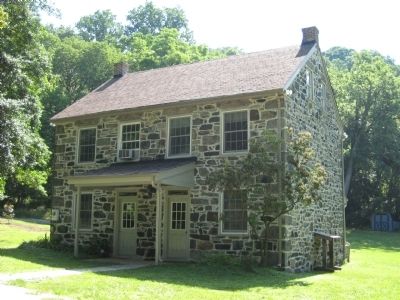