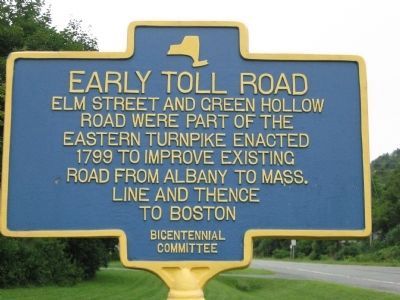 Elm Street and Green Hollow Road were part of the Eastern Turnpike enacted 1799 to improve existing road from Albany to Mass. line and thence to Boston.

Topics. This historical marker is listed in this topic list: Roads & Vehicles. A significant historical year for this entry is 1799.

Click or scan to see
this page online
(approx. 6.3 miles away); Town of Grafton War Memorials (approx. 6.6 miles away). Touch for a list and map of all markers in Berlin.