Marking the End of the Oregon Trail 1844 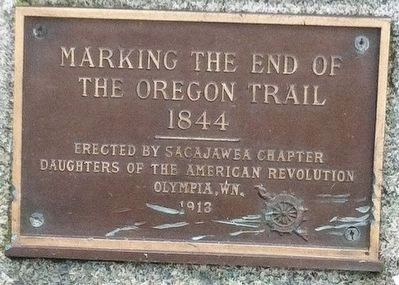 Topics and series. This historical marker is listed in these topic lists: Roads & Vehicles • Settlements & Settlers. In addition, it is included in the Daughters of the American Revolution, and the Oregon Trail series lists.

Location. 47° 2.585′ N, 122° 54.068′ W. Marker is in Olympia, Washington, in Thurston County. Marker can be reached from the intersection of Capitol Way South and Legion Way SE. Marker is in the northwest corner of Sylvester Park. Touch for map. Marker is in this post office area: Olympia WA 98501, United States of America. Touch for directions.

Other nearby markers. At least 8 other markers are within walking distance of this marker. John Rankin Rogers (within shouting distance of this marker); Washington Women Win the Vote (about 300 feet away, measured in a direct line); Washington's State Capitol Design (approx. 0.4 miles away); The First William Winlock Miller High School (approx. 0.4 miles away); POW AND MIA Monument 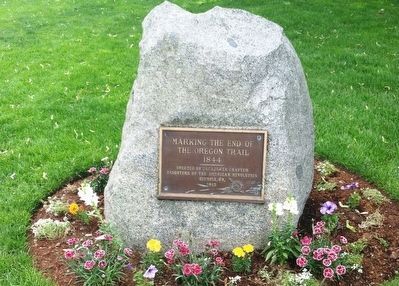