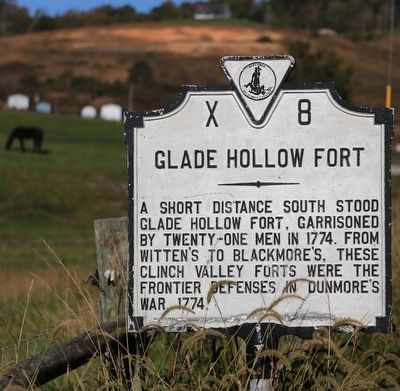 By J. J. Prats, October 18, 2015
1. Glade Hollow Fort Marker
Inscription.
Glade Hollow Fort. . A short distance south stood Glade Hollow Fort, garrisoned by twenty-one men in 1774. From Witten’s to Blackmore’s, these Clinch Valley forts were the frontier defenses in Dunmore’s War, 1774. . This historical marker was erected in 1932 by Conservation and Development Commission. It is Near Lebanon in Russell County Virginia

A short distance south stood Glade Hollow Fort, garrisoned by twenty-one men in 1774. From Witten’s to Blackmore’s, these Clinch Valley forts were the frontier defenses in Dunmore’s War, 1774.

Topics and series. This historical marker is listed in these topic lists: Forts and Castles • Settlements & Settlers • Wars, US Indian. In addition, it is included in the Virginia, Clinch River Forts Circa 1774 series list. A significant historical year for this entry is 1774.

Location. 36° 53.703′ N, 82° 7.083′ W. Marker is near Lebanon, Virginia, in Russell County. Marker is on Fincastle Road (Virginia Route 71) just west of Clydesway Road, on the right when traveling east. Touch for map. Marker is in this post office area: Lebanon VA 24266, United States of America. Touch for directions.

Regarding Glade Hollow Fort. This fort is also known as Fort Christian.

Also see . . .  Frontier Forts in Southwestern Virginia. 1968 historical sketch by Emory L. Hamilton. Excerpt: “Fort Christian, better known as Glade Hollow Fort lies between Dickensonville and Lebanon (Russell Co., Va.) on Cedar Creek. It is hard to determine just who owned the land when the fort was erected in 1774, as no one had deeds to lands prior to the sitting of the Commissioners in 1781, only warrants, and these warrants changed hands and were assigned many times to others before actual recording took place. Some available data indicates that the land may have been in possession of one James Smith who seems to disappear from the records after 1777. This assumption is based upon letters written by Colonel William Christian and Arthur Campbell, the former being on the Clinch at this time supervising the erection of the forts.” (Submitted on October 22, 2015.)
Credits. This page was last revised on June 16, 2016. It was originally submitted on October 22, 2015, by J. J. Prats of Powell, Ohio. This page has been viewed 625 times since then and 55 times this year. Photos:   1, 2. submitted on October 22, 2015, by J. J. Prats of Powell, Ohio.
Share This Page.