Lincoln Under Fire at Fort Stevens 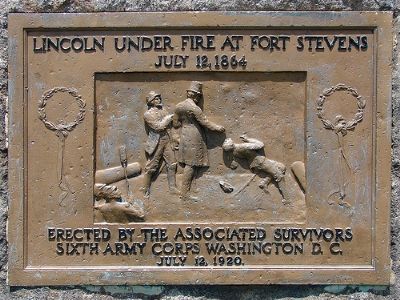 Topics and series. This historical marker is listed in these topic lists: Forts and Castles • Government & Politics • War, US Civil. In addition, it is included in the Defenses of Washington, and the Former U.S. Presidents: #16 Abraham Lincoln series lists. A significant historical date for this entry is July 12, 1979.

Location. 38° 57.871′ N, 77° 1.748′ W. Marker is in Brightwood in Washington, District of Columbia. Marker can be reached from 13th Street Northwest north of Fort Stevens Drive Northwest, on the right when traveling north. It is located within the reconstructed Fort Stevens just to the north of the flag pole. Touch for map. Marker is at or near this postal address: 6001 13th Street Northwest, Washington DC 20011, United States of America. Touch for directions. 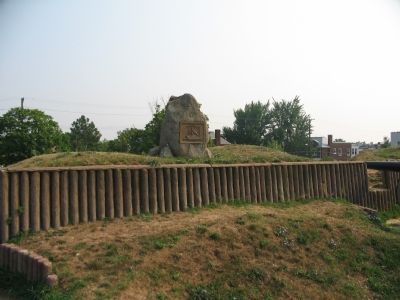 Photographed By Craig Swain, August 4, 2007
2. Marker on the Parapet of Fort Stevens

Regarding Lincoln Under Fire at Fort Stevens. Fort Stevens was one of the ring of forts that defended Washington during the Civil War. President Abraham Lincoln came out from the city to Fort Stevens to watch the VI Army Corps repulse the Confederates, who were under the command of Lt. Gen. Jubal A. Early. This fight was the closest Confederates got to Washington during the War Between the States. Lincoln himself came under fire from Confederate sharpshooters. The bas-relief on this marker depicts this close call.

Additional commentary.
1. Sharpshooters firing on Lincoln
On the grounds of Walter Reed 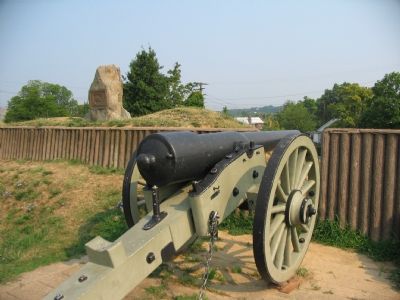 Photographed By Craig Swain, August 4, 2007
3. Marker and Cannon
Parrott rifled cannon stand guard over Fort Stevens today.
Army Medical Center is a plaque which claims to be the site of a “Sharpshooter’s Tree.” Legend has it a very tall tulip tree afforded several Confederates cover from which to fire upon the Fort Stevens works, in particular President Lincoln, who insisted on observing the fighting over the protests of the officers present.
— Submitted August 5, 2007, by Craig Swain of Leesburg, Virginia.
2. General Jubal Early’s comments
The Confederate commander, General Jubal Early, recognized Fort Stevens was too strong for his forces to break and retreated the next day. To his staff, he remarked, “We didn’t take Washington, but we scared Abe Lincoln like hell.”
— Submitted August 5, 2007, by Craig Swain of Leesburg, Virginia.
3. The Young Oliver Wendell Holmes and President Lincoln
One of the vignettes often told concerning Fort Stevens centers upon Lincoln's visit while the Confederates were skirmishing in front of the earthworks. The story goes that President Lincoln was so taken by the scene of battle he stood upon the parapet of the fort, with trademark stovepipe hat, while Confederate sharpshooters were firing upon the soldiers in the fort. Lincoln seemed oblivious 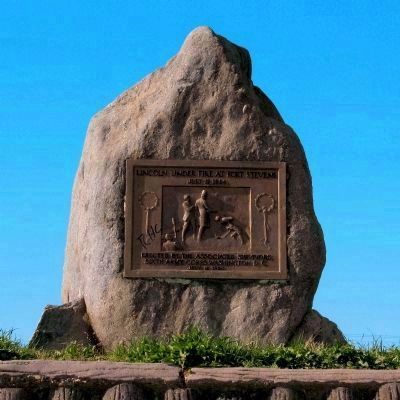 Photographed By Allen C. Browne, April 16, 2008
4. Lincoln Under Fire at Fort Stevens Marker
The Lincoln Boulder was set up by the Associated Survivors of the Sixth Army Corps in 1911. The bronze plaque containing a bas-relief of Lincoln under fire at Fort Stevens by Otto Schweizer and James Kelly was dedicated on July 12, 1920.
to the danger, even as several men nearby were hit by enemy fire. A young Captain Oliver Wendell Holmes finally exclaimed, "Get down, you fool!" Lincoln soon obliged, but later commented to the future Supreme Court Justice, "It is good to see you know how to talk to civilians." The full accuracy of the story is open for some debate, but is presented and annotated on Mr. Lincoln's White House Website (see links). Note To Editor only visible by Contributor and editor
— Submitted October 14, 2007, by Craig Swain of Leesburg, Virginia.
4. Dedication of Lincoln Under Fire Boulder
The boulder marking the spot where Lincoln stood (not the plaque which came later) was dedicated on November 7, 1911. At that dedication ceremony, Louisiana congressman Floyd King, who had been an artillerist serving with General Early, spoke. He went to lengths to praise the work of President Lincoln, going to the point of stating he was glad the Confederate attack had failed. Certainly an interesting perspective coming from a Confederate veteran.
— Submitted October 17, 2007, by Craig Swain of Leesburg, Virginia. 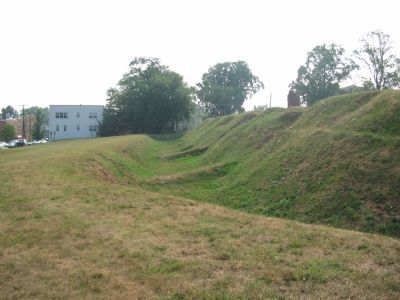 Photographed By Craig Swain, August 4, 2007
5. The Glasis, Ditch, and Parapet of Fort Stevens in Profile
The marker can be seen on the right, atop the parapet. 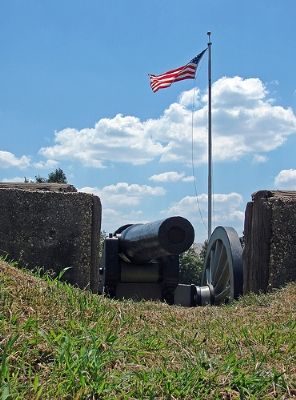 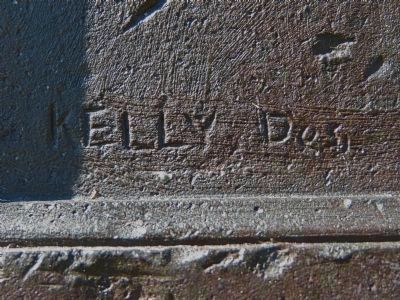 Photographed By Allen C. Browne, May 1, 2013
7. Kelly, Des. (Signature on Plaque)
The dramatic scene of Surgeon Crawford being wounded while Wright pleads with Lincoln to come down off the parapet was drawn by James Kelly. 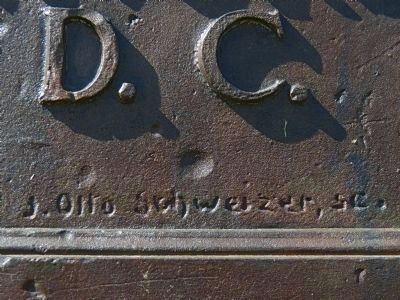 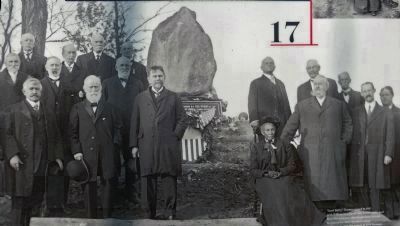 1911
9. 1911 Dedication of the Lincoln Boulder
"Aunt Betty" Thomas posed in 1911 with William Van Zandt Cox, to her right and Civil War veterans who funded the Lincoln Memorial Boulder, the first marker commemorating the events of Fort Stevens. (Photo from the nearby "Aunt Betty's Story" marker.) The plaque on the boulder that preceded the 1920 Kelly/Schweizer bas-relief plaque indicated that this was the site General Wright identified as the spot where Lincoln stood exposed to enemy fire. 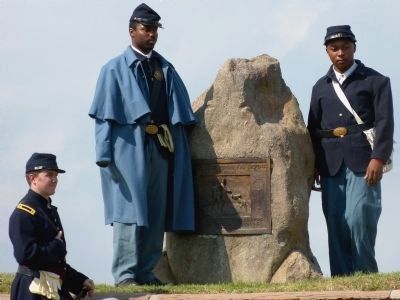 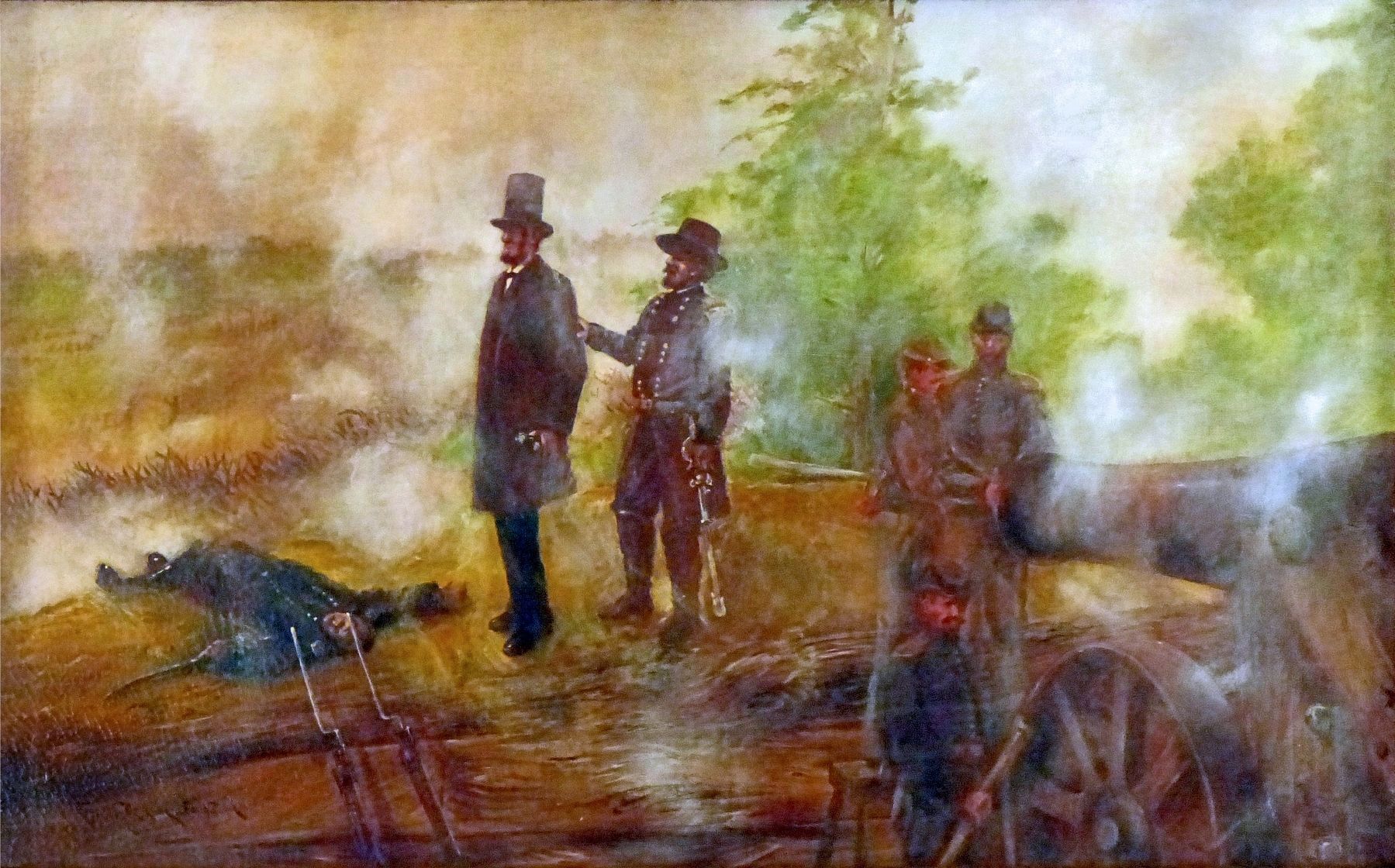