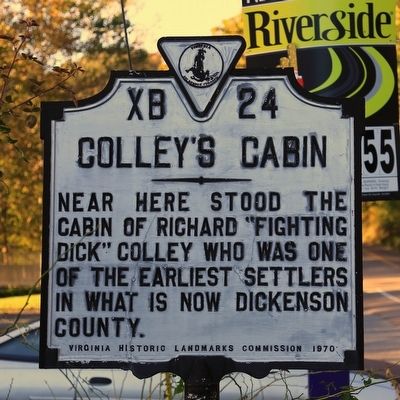 By J. J. Prats, October 16, 2015
1. Colley’s Cabin Marker
Inscription.
Colley’s Cabin. . Near here stood the cabin of Richard “Fighting Dick” Colley who was one of the earliest settlers in what is now Dickenson County. . This historical marker was erected in 1970 by Virginia Historic Landmark Commission. It is in Birchleaf in Dickenson County Virginia

Near here stood the cabin of Richard “Fighting Dick” Colley who was one of the earliest settlers in what is now Dickenson County.

Topics. This historical marker is listed in this topic list: Settlements & Settlers. A significant historical year for this entry is 1820. 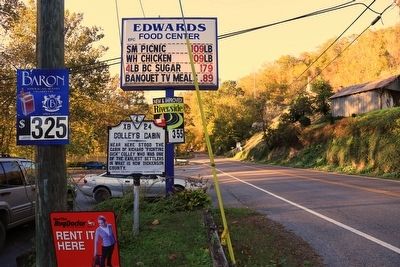 Also see . . .  Geni.com Entry for Richard Colley. Scroll down for the essay. Excerpt: “Dick Colley was strong of limb, heart and temper. It took all that to conquer the wilderness. No one ever questioned his bravery, nor did anyone who ever felt the wallop of his bruising fist soon forget its crushing power. His hot temper, often unleashed and terrible, swung him from one personal encounter into another with his neighbors ... He was often wobbly with hard liquor, his heart and strength carried him through ... It seemed that he had more fights with John Fuller than any other man ... One day they met in the woods, and as usual got into a quarrel. John managed to get the first blow which knocked Dick almost unconscious. While Dick lay on the ground, John danced around him singing ... ‘Poor old Dick he died of late; Straightway he went to Heaven's gate. There he met the Devil with a club, And drove him back to Beezlebub!’ By the time John had finished his song Dick felt he could handle him, and got up and won the fight.” (Submitted on November 18, 2015.)
Credits. This page was last revised on June 16, 2016. It was originally submitted on November 18, 2015, by J. J. Prats of Powell, Ohio. This page has been viewed 377 times since then and 17 times this year. Photos:   1, 2. submitted on November 18, 2015, by J. J. Prats of Powell, Ohio.
Share This Page.