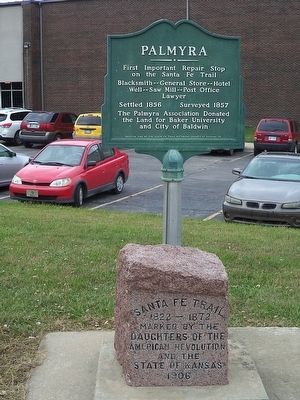 The Palmyra Association Donated the Land for Baker University and City of Baldwin.

Stone Base Santa Fe Trail 1822-1872 Marked by the Daughters of the American Revolution and the State of Kansas 1906 . This historical marker was erected by Santa Fe Historical Society of Douglas County. It is in Baldwin City in Douglas County Kansas

Topics and series. This historical marker is listed in this topic list: Settlements & Settlers. In addition, it is included in the Santa Fe Trail series list.

Other nearby markers. At least 8 other markers are within 4 miles of this marker, measured as the crow flies. Palmyra Well (about 400 feet away, measured in a direct line); Trail Park (approx. 0.4 miles