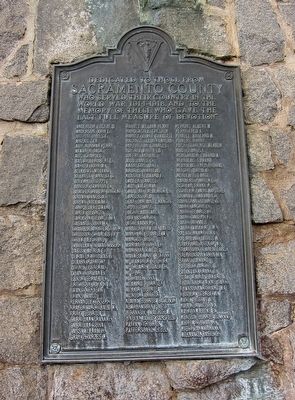 Dedicated to those from Sacramento County who served their country in the World War 1914-1918, and to the memory of these who "gave the last full measure of devotion" 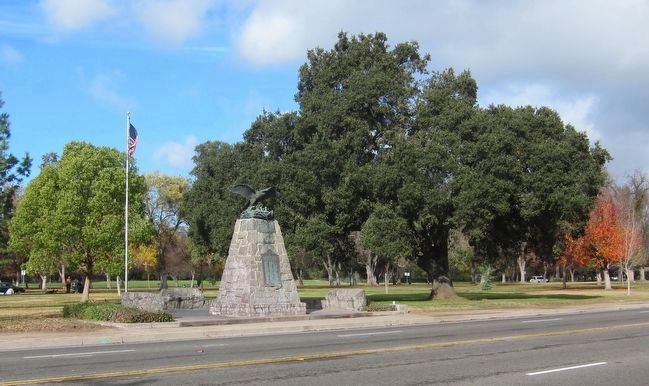 By J. Makali Bruton, June 30, 2019
3. An additional nearby marker to Afghanistan and Iraq fallen
This additional marker is mounted to a short cement block just north of the WWI memorial. It reads:

This grove is dedicated to Californians who gave their lives in the service of our nation in Afghanistan and Iraq.
May 2005
Planted by Veterans of Foreign Wars, Dept. of California, and Lt. Gov. Cruz Bustamante
1926 by The Woman's Council of Sacramento.

More about this memorial. The marker is located on the very eastern edge of William Land Park on Freeport Boulevard.

Regarding Sacramento County WW I Veterans Memorial. The lone woman listed on the marker, Lillie Catherine Todhunter, was a nurse in the US Navy, and died October 21, 1918 of influenza at Mare Island. (This was during the Spanish Flu epidemic.) She was from Sacramento, and by odd coincidence lived on the next block over from my house, all of perhaps 300 ft. from my back door. - AR