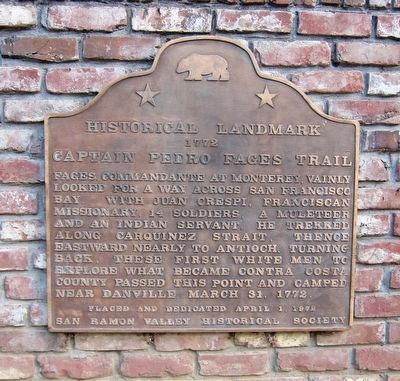 Fages, Commandante at Monterey, vainly looked for a way across San Francisco Bay. With Juan Crespi, Franciscan missionary, 14 soldiers, a muleteer and an Indian servant, he trekked along Carquinez Strait, thence eastward nearly to Antioch. Turning back, these first white men to explore what became Contra Costa County, passed this point and camped near Danville March 31, 1772.
Placed and dedicated April 1, 1972

Topics and series. This historical marker is listed in this topic list: Exploration. In addition, it is included in the California Historical Landmarks series list. A significant historical date for this entry is March 31, 1772.

Other nearby markers. At least 8 other markers are within 2 miles of this marker, measured as the crow flies. Alamo Cemetery (about 600 feet away, measured in a direct 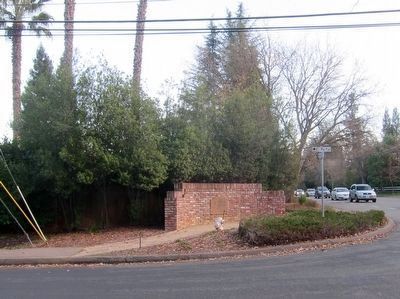 More about this marker. This marker is California State Historical Landmark Number 853.

Also see . . .  Presenting the Past: Capt. Pedro Fages leads Spanish to the Valley. The Danville Express' (October 3, 2008) article on the Fages expedition: "Capt. Fages was charged with looking for a way around the San Francisco Bay so that a mission honoring St. Francis could be placed on the north shore. He led a 15-man troop, which included "six Catalonian volunteers, six leather-jackets, a muleteer, and an Indian servant," according to missionary Padre Juan Crespi. They skirted the Berkeley hills, traveled next to the strait into Contra Costa, and discovered two huge rivers that fed a huge delta. Then they turned south through the tri-valleys for the return trip to Monterey.... The Fages-Crespi expedition trip was significant because it established the site for both the San Francisco mission and presidio south of the Golden Gate. (Submitted on December 19, 2015.)
Credits. This page was last revised on June 16, 2016. It was originally submitted on December 19, 2015, by Andrew Ruppenstein of Sacramento, California. This page has been viewed 288 times since then and 7 times this year. Photos:   1, 2. submitted on December 19, 2015, by Andrew Ruppenstein of Sacramento, California.
Share This Page.