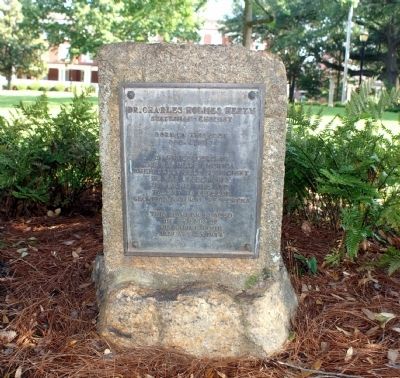 By his leadership
He had made America
Chemically self sufficient
He has unselfishly
Given his time and
Talent to develop
Georgia's natural resources
This marker placed
By friends of
His native home
January 25, 1934

Erected 1934 by Friends of his native home.

Topics. This historical marker is listed in these topic lists: Education • Horticulture & Forestry • Industry & Commerce. A significant historical month for this entry is January 1851.

Location. 33° 4.846′ N, 83° 13.801′ W. Marker is in Milledgeville, Georgia, in Baldwin County. Marker is on West Handcock Street (Georgia Route 49) just west of Wilkinson Street, on the right when traveling west. On the campus of Georgia College State University. Touch for map. Marker is in this post office area: Milledgeville GA 31061, United States of America. Touch for directions.

Other nearby markers. At least 8 other markers are within walking distance of this marker. Birthplace of Charles Holmes Herty (here, next to this marker); Georgia State Penitentiary (a few steps from this marker); Baldwin County Veterans Memorial