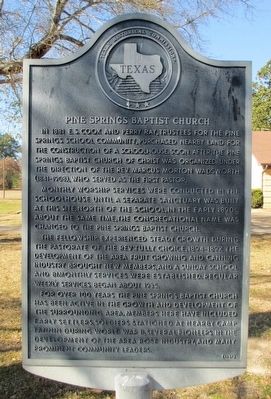 In 1881, E.S. Cook and Perry Ray, trustees for the Pine Springs School community, purchased nearby land for the construction of a schoolhouse. Soon after, the Pine Springs Baptist Church of Christ was organized under the direction of the Rev. Marcus Morton Wadsworth (1841-1908), who served as the first pastor.

Monthly worship services were conducted in the schoolhouse until a separate sanctuary was built at this site, north of the school, in the early 1890s. About the same time, the congregational name was changed to the Pine Springs Baptist Church.

The fellowship experienced steady growth during the pastorate of the Rev. Tully Choice, 1894-1897. The development of the area fruit growing and canning industry brought new members, and a Sunday School and bimonthly services were established. Regular weekly services began about 1935.

For over 100 years the Pine Springs Baptist Church has been active in the growth and development of the surrounding area. Members here have included early settlers, soldiers stationed at nearby Camp Fannin during World War II, several pioneers in the development of the area rose industry, 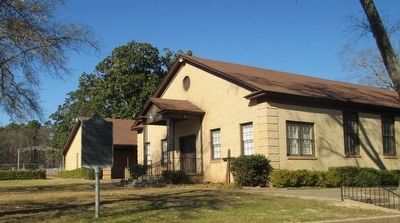