Where It All Began 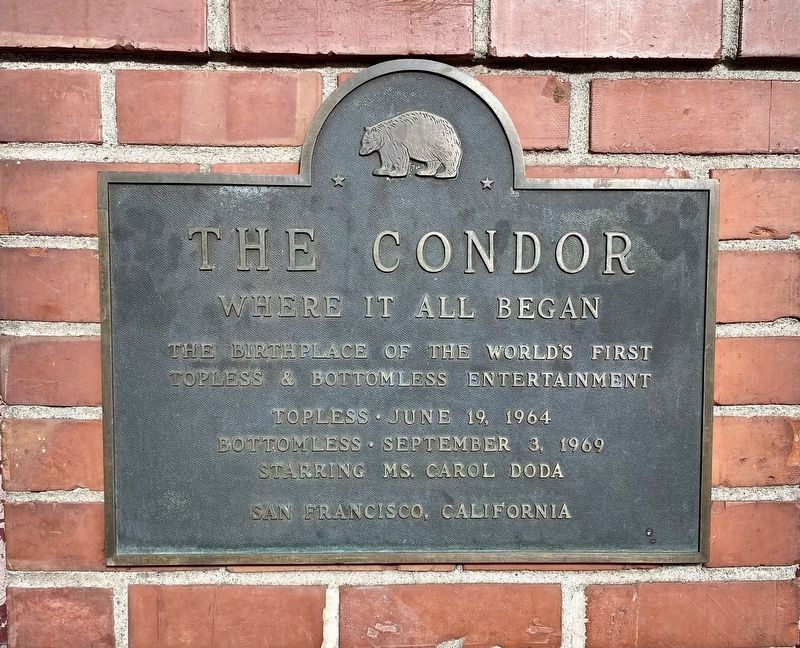 Photographed By Andrew Ruppenstein, December 12, 2020
1. The Condor Marker
Inscription.
The Condor. Where It All Began.
The birthplace of the world’s first topless and bottomless entertainment. , Topless . June 19, 1964 Bottomless . September 3, 1969 Starring Ms. Carol Doda San Francisco, California. . This historical marker is in San Francisco in San Francisco City and County California

The birthplace of the world’s first topless & bottomless entertainment.

Topics. This historical marker is listed in these topic lists: Industry & Commerce • Women. A significant historical month for this entry is June 1914. 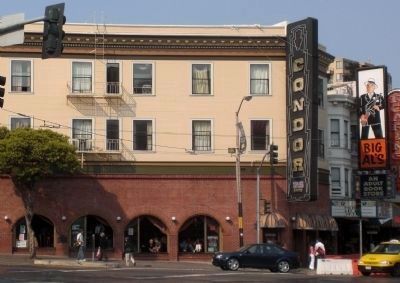 Photographed By Andrew Ruppenstein, July 12, 2008
2. The Condor Club as it appears today
The marker is visible between the first and second window arches (from the left). At one point the Club was renowned for its neon sign depicting an outline of Carol Doda, with red lights twinkling where the nipples would be. But the sign is long gone.

More about this marker. Despite the superficial similarities in color, shape, and style (note the bear) to markers denoting official state landmarks, the Condor Club is not a registered California Historical Landmark.

Regarding The Condor. As with other media, just because it's written on a plaque doesn't make it true. The claim that the Condor Club was the birthplace of topless and bottomless entertainment is dubious. Yet there would be more than a grain of truth to call the Condor Club the leading innovator of such entertainment, at least in the US in the 20th Century. The young Carol Doda's dancing debut in a topless swimsuit designed by Rudi Gernreich certainly didn't start the so-called Sexual Revolution, but it certainly was part of it, immediately setting off imitations both in San Francisco and in cities throughout the US.

Doda was known not simply for doing what she did, but also for the rapid expansion of her bustline, going from a reported 34 to 44 inches, thanks to silicone injections, within a few years of her debut. Her act was famous for her entrance - a descent from the ceiling to the floor on top of a hydraulicly-operated grand piano, with her writhing and gyrating all the while. Without doubt, she was the country's most famous ecdysiast.

The Condor Club is better appreciated as not just a strip club, even if it was perhaps the first of its kind in the US, but rather as part of the burgeoning cultural scene that was taking place in San Francisco during the era. The Condor Club was located in the heart of the North Beach, less than two short blocks from other groundbreaking venues such as the City Lights bookstore (publishing beat and avant garde poetry and prose - think Lawrence Ferlinghetti, Allen Ginsburg, Jack Kerouac), the Purple Onion and The Hungry I (Woody Allen, Lenny Bruce, Mort Sahl, Barbara Streisand, the Limelighters, Phyllis Diller, Dick Gregory, the Smothers Brothers, and the Kingston Trio all got their start or played at either of these clubs regularly during the late 50's and early 60's). There was a time that the cultural events in this small area influenced the the country, but no longer. Today North Beach is still a fun place, but its cultural importance relative to how it used to be is minimal.

Today the Condor Club is a sports bar.

After retiring from dancing in the 1980's, Doda did promos for a TV station (Channel 36 - "The Perfect 36"), and has since opened up a lingerie shop in the city.

The grand piano is still remembered for the events of the night of November 24, 1983, when a club bouncer, Jimmy "the Beard" Ferrozo, and an exotic dancer, Teresa Hill, got a little too amorous on top of the piano, somehow tripping a control on the hydraulics and sending the piano upwards, in the process pinning them both to the ceiling. Ferozzo died as a result, although sources differ as to whether it was due to a heart attack or asphyxiation.
Credits. This page was last revised on December 15, 2020. It was originally submitted on July 17, 2008, by Andrew Ruppenstein of Sacramento, California. This page has been viewed 1,709 times since then and 82 times this year. Photos:   1. submitted on December 15, 2020, by Andrew Ruppenstein of Sacramento, California.   2. submitted on July 17, 2008, by Andrew Ruppenstein of Sacramento, California. • Kevin W. was the editor who published this page.
Share this page.