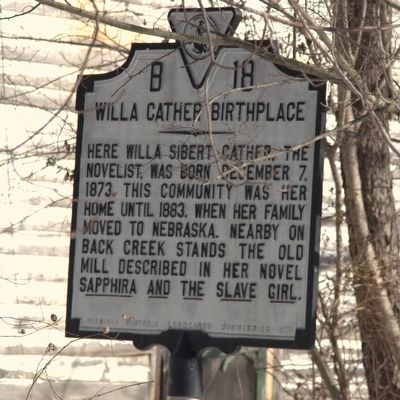 Photographed By J. J. Prats, January 30, 2016
1. Willa Cather Birthplace Marker
Inscription.
Willa Cather Birthplace. . , Here Willa Sibert Cather, the novelist, was born December 7, 1873. This community was her home until 1883, when her family moved to Nebraska. Nearby on Back Creek stands the old mill described in her novel Saphira and the Slave Girl. . This historical marker was erected in 1970 by Virginia Historic Landmarks Commission. It is in Gore in Frederick County Virginia

Here Willa Sibert Cather, the novelist, was born December 7, 1873. This community was her home until 1883, when her family moved to Nebraska. Nearby on Back Creek stands the old mill described in her novel Saphira and the Slave Girl.

Topics and series. This historical marker is listed in these topic lists: Arts, Letters, Music • Women. In addition, it is included in the Virginia Department of Historic Resources series list. A significant historical date for this entry is December 7, 1873.

More about this marker. It cannot be seen from the eastbound lanes due to the width of the divided highway. From the westbound lanes it can be seen in the winter, when the leaves are off the bushes and vines that obscure it. The best view is after you pass it, looking back.

Regarding Willa Cather Birthplace. This is a private residence and it is very close to the highway. It is important that you stay on the shoulder of the highway and not trespass onto 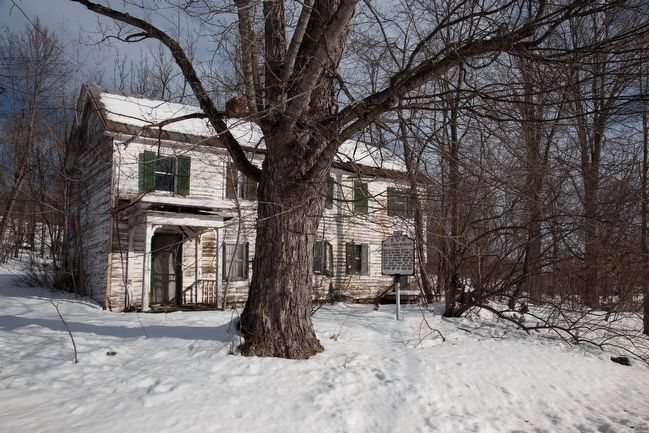 Click or scan to see
this page online
the property.

Also see . . .
1. Willa Cather Birthplace. National Register of Historic Places Inventory--Nomination Form:
Statement of Significance. Famed American novelist and short-story writer Willa Cather (1873-1947) was born in an un prepossessing log and frame house in the Back Creek Valley north of Winchester, Virginia. The house hitherto has received little of the recognition it merits as a literary shrine; most of the attention has been focused on Miss Cather’s later home in Red Cloud, Nebraska. A typical example of Shenandoah Valley vernacular architecture , the birthplace was originally owned by Miss Cather’s great-grandfather, Jacob Seibert. Its construction date is not known, however, it would seem likely that the earlier log section was erected around the second decade of the nineteenth century and that later modifications and extensions were made around 1850. In 1869 Seibert’s heirs conveyed the house and four-and-a-half acres of land to his daughter, Rachel E. Boak, Miss Cather’s grandmother. Mrs. Boak’s daughter, Virginia, and Charles Cather were married in the house in December 1872. There, one year later, on December 7, 1873, their daughter, Willa, was born.

Willa Cather's grandfather, William Cather, had been a Unionist during the War Between the States. After the war Federal authorities appointed him sheriff of Frederick County; his two sons, George and Charles, were made his deputies. In an area of strong Southern sympathies, the Cathers hardly endeared themselves to the majority of the population. Probably as a result of local resentment, George Cather moved to Nebster County, Nebraska, in 1873. His father followed in 1877. The Cather family home, Willow Shade, a substantial brick farmhouse just up the road from the Boak house, was left in the care of Charles Cather, who brought his wife and young daughter there to live that same year. In 1883, Charles Cather, along with his wife, daughter, and Mrs. Boak, joined his family in Nebraska. After 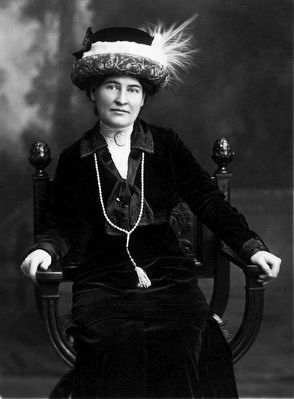 Aime Dupont Studio, New York via Wikimedia Commons, circa 1912
3. Willa Cather circa (1873–1947)
operating a ranch for a year he settled in the village of Red Cloud.

Despite i t s seeming lack of attachment to Virginia, Miss Cather’s family was relatively distinguished in the area. Her grandfather, William L. Boak, represented Berkeley County in the Virginia House of Delegates i n 1845-46. Her great-grandfather, Charles Cather, had represented Frederick County a t the same time. The Cathers were capable farmers, and three of Willa Cather’s Boak uncles had served in the Confederate Army.

Because Miss Cather spent what she called her formative years (ages 8 t o 15) in Nebraska it is not surprising that little of her Virginia-youth is reflected in her writings. She i s mainly remembered f o r her celebration of the pioneer traditions of the Nebraska prairies and the deserts of the Southwest. Her fiction centers on the frontier traits and themes of courage and struggle, respect for the land, family ties, and the sense of place. As one biographer noted: “She became a champion of these elements of an older society against the modern, industrial, materialistic world.” However, her interest in the quest for ancestors and the sense of a historical past may have had their roots in her Virginia background.

Following the family’s removal to Nebraska, Mrs. Boak conveyed her granddaughter's birthplace to Mrs . S. S. Gore. It changed ownership four more times prior to 1950 when it was bought by Charles T. Brill, the present owner.

Description. The Willa Cather Birthplace is a simple, two-story log house probably erected around the second decade of the nineteenth century. I t was enlarged by the addition of a two-story frame extension on its western end approximately twenty years after the initial construction date.

A later, probably post-Civil War, two-story frame ell extends from the center of the rear wall. With the enlargement the house now has a continuous facade of five bays with entrances in each of the outside bays. A simple nineteenth-century porch shelters the western entrance. The original portion includes the three eastern bays. This section was built with an exterior end chimney on its west end, but because of the extension, the chimney is now incorporated in the addition and only the upper portion of the stack is visible above the roof ridge.

The main portion of the house is covered by a continuous gable roof sheathed in standing seam sheet metal with simple box cornices at the eaves. The rear ell has a gable roof as well. Weatherboards cover all but a section of the rear wall and the rear ell where modern asbestos shingles are employed. The underpinnings of the main section are fieldstone with the break between the original portion and the extension clearly evident on the facade. The windows originally had small-pane sashes, but all now have one-over-one sash. A l l of the facade windows are hung with louvered blinds.

The first-floor plan of the main section consists of two large rooms. The original portion formerly had a board partition separating i t s main room from the stair which ascends against the east wall. The second-floor plan of the original portion includes two rooms separated by a board partition from a narrow passage along the rear wall. This passage leads to the single large room in the extension. The partition between the two bedrooms in the original section may have been shifted as it runs into a window, which is now made into a blind window on the facade. Much of the early fabric is intact in the original portion including flooring, batten doors, board partitions, and simple stair. The stair has square balusters, a square newel, and a simple handrail. Most of the woodwork on the first floor of the original section is, painted with a very stylized comb graining executed by an Italian in the 1940s. The woodwork in t h e first-floor room of the extension is plain; the only notable feature is a simple mid-nineteenth-century mantel. The rooms in the rear ell have no particularly distinguishing features. The ell's first floor now contains the kitchen. A two-story kitchen and servants' house, in dilapidated condition, stands in the yard, just east of the ell. The construction date of the building is uncertain but its proportions and details suggest a date in the third or fourth decade of the nineteenth century.

The general setting of the Willa Cather birthplace is pastoral; both pastures and cultivated fields are in the vicinity. The quality of the house's immediate setting has been significantly marred by the widening of U.S. Route 50 which has taken all but a small portion of the front yard. However, the large maple trees dotting the lawn help maintain a homey atmosphere. Immediately in front of the house is a state highway historical marker commemorating the fact that the house is the birthplace of Willa Cather.

The house at present is in only fair condition but receives essential maintenance. (Submitted on February 9, 2016.)

Editor’s want-list for this marker. Photos of the old mill • Can you help?
Share this page.