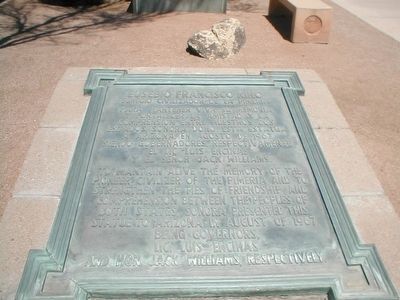 Photographed By Don Morfe, June 15, 2006
1. Eusebio Francisco Kino Marker
Inscription.
English: , To maintain alive the memory of the pioneer civilizer of the Pimeria and to strengthen the ties of friendship and comprehension between the peoples of both states, Sonora presented this statue to Arizona in August of 1967 being Governors, Lic. Luis Encinas and Hon. Jack Williams, respectively. . This historical marker is in Phoenix in Maricopa County Arizona