The Medal of Honor Monument 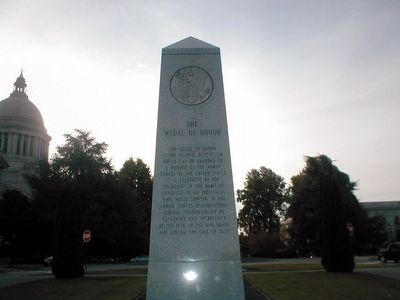 The Medal of Honor is the highest distinction which can be awarded to a member of the Armed Forces of the United States. It is presented by the President in the name of Congress to an individual who while serving in the Armed Forces distinguished himself conspicuously by gallantry and intrepidity at the risk of his life above and beyond the call of duty.

Topics and series. This memorial monument is listed in these topic lists: War, Vietnam • War, World II. In addition, it is included in the Medal of Honor Recipients series list.

Location. 47° 2.188′ N, 122° 54.161′ W. Marker is in Olympia, Washington, in Thurston County. Memorial is on Winged Victory Circle. The marker is on the grounds of the Washington State Capitol. Touch for map. Marker is in this post office area: Olympia WA 98501, United States of America. Touch for directions. 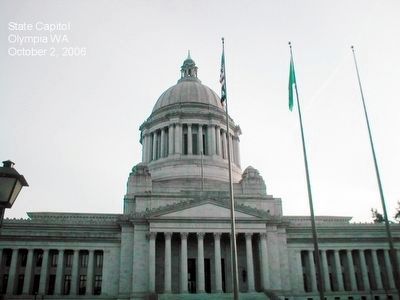 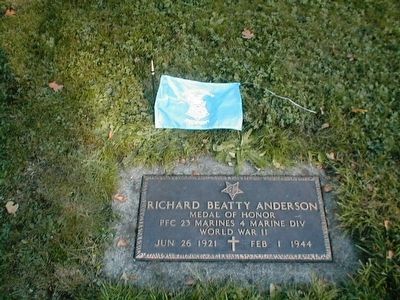 By Don Morfe, September 30, 2006
3. Richard Beatty Anderson-World War II Medal of Honor Recipient
He is buried in New Tocoma Cemetery, Tocoma WA. His Medal of Honor information and citation is: Killed in Action-*ANDERSON, RICHARD BEATTY • Rank and organization: Private First Class, U.S. Marine Corps. Citation: For conspicuous gallantry and intrepidity at the risk of his life above and beyond the call of duty while serving with the 4th Marine Division during action against enemy Japanese forces on Roi Island, Kwajalein Atoll, Marshall Islands, 1 February 1944. Entering a shell crater occupied by 3 other marines, Pfc. Anderson was preparing to throw a grenade at an enemy position when it slipped from his hands and rolled toward the men at the bottom of the hole. With insufficient time to retrieve the armed weapon and throw it, Pfc. Anderson fearlessly chose to sacrifice himself and save his companions by hurling his body upon the grenade and taking the full impact of the explosion. His personal valor and exceptional spirit of loyalty in the face of almost certain death were in keeping with the highest traditions of the U.S. Naval Service. He gallantly gave his life for his country. 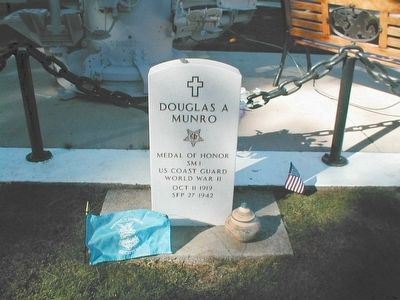 By Don Morfe, September 29, 2006
4. Douglas Albert Munro, World War II Medal of Honor Recipient
He is buried in Laurel Hill Memorial Park, Cle Elum, WA. His Medal of Honor information is citation is: Killed in Action-*MUNRO, DOUGLAS ALBERT • Rank and organization: Signalman First Class, U.S. Coast Guard Citation: For extraordinary heroism and conspicuous gallantry m action above and beyond the call of duty as Petty Officer in Charge of a group of 24 Higgins boats, engaged in the evacuation of a battalion of marines trapped by enemy Japanese forces at Point Cruz Guadalcanal, on 27 September 1942. After making preliminary plans for the evacuation of nearly 500 beleaguered marines, Munro, under constant strafing by enemy machineguns on the island, and at great risk of his life, daringly led 5 of his small craft toward the shore. As he closed the beach, he signaled the others to land, and then in order to draw the enemy's fire and protect the heavily loaded boats, he valiantly placed his craft with its 2 small guns as a shield between the beachhead and the Japanese. When the perilous task of evacuation was nearly completed, Munro was instantly killed by enemy fire, but his crew, 2 of whom were wounded, carried on until the last boat had loaded and cleared the beach. By his outstanding leadership, expert planning, and dauntless devotion to duty, he and his courageous comrades undoubtedly saved the lives of many who otherwise would have perished. He gallantly gave his life for his country. (Note: He is currently the only U.S. Coast Guardsmen to be awarded the Medal of Honor) 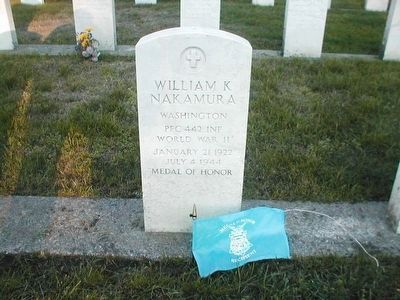 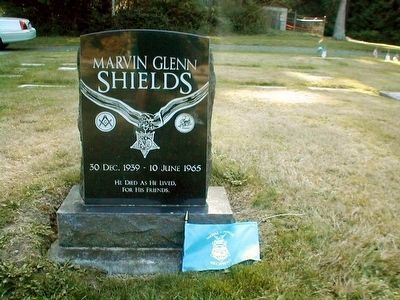 By Don Morfe, October 1, 2006
6. Marvin Glenn Shields-Vietnam Medal of Honor Recipient
He is buried in Gardiner Cemetery, Gardiner, WA. His Medal of Honor information and citation is: Killed in Action-*SHIELDS, MARVIN G. • Rank and Organization: Construction Mechanic Third Class, U.S. Navy, Seabee Team 1104 • Place and Date: Dong Xoai, Republic of Vietnam, 10 June 1965 Citation: For conspicuous gallantry and intrepidity at the risk of his life above and beyond the call of duty. Although wounded when the compound of Detachment A342, 5th Special Forces Group (Airborne), 1st Special Forces, came under intense fire from an estimated reinforced Viet Cong regiment employing machineguns, heavy weapons and small arms, Shields continued to resupply his fellow Americans who needed ammunition and to return the enemy fire for a period of approximately 3 hours, at which time the Viet Cong launched a massive attack at close range with flame-throwers, hand grenades and small-arms fire. Wounded a second time during this attack, Shields nevertheless assisted in carrying a more critically wounded man to safety, and then resumed firing at the enemy for 4 more hours. When the commander asked for a volunteer to accompany him in an attempt to knock out an enemy machinegun emplacement which was endangering the lives of all personnel in the compound because of the accuracy of its fire, Shields unhesitatingly volunteered for this extremely hazardous mission. Proceeding toward their objective with a 3.5-inch rocket launcher, they succeeded in destroying the enemy machinegun emplacement, thus undoubtedly saving the lives of many of their fellow servicemen in the compound. Shields was mortally wounded by hostile fire while returning to his defensive position. His heroic initiative and great personal valor in the face of intense enemy fire sustain and enhance the finest traditions of the U.S. Naval Service.
Credits. This page was last revised on June 16, 2016. It was originally submitted on February 18, 2016, by Don Morfe of Baltimore, Maryland. This page has been viewed 339 times since then and 3 times this year. Photos:   1, 2, 3, 4, 5, 6. submitted on February 18, 2016, by Don Morfe of Baltimore, Maryland. • Bill Pfingsten was the editor who published this page.
Share this page.