A Monument to Water 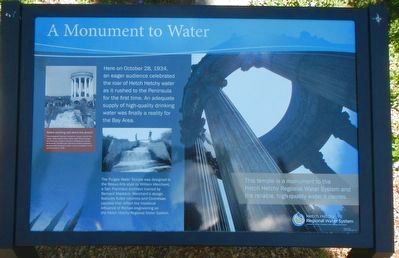 Photographed By Barry Swackhamer, February 15, 2016
1. A Monument to Water Marker
Captions: (left) Notice anything odd about this photo? This photograph features a temporary 'temple' built for the media. When pristine Hetch Hetchy water finally reached the Peninsula, everyone wanted to celebrate the moment of its arrival. Therefore San Francisco erected a temporary stucture that remained in place until the completion of the current temple in 1938.; (center) The Plugas Water Temple was designed in the Beaux Arts style by William Merchant, a San Francisco architect trained by Bernard Maybeck. Merchant's design features fluted columns and Corinthian capitals that reflect the historical influence of Roman engineering on the Hetch Hetchy Regional Water System.; (right) This temple is a monument to the Hetch Hetchy Regional Water System and the reliable, high-quality water it carries.
Inscription.
A Monument to Water. . Here on October 28, 1934, an eager audience celebrated the roar of Hetch Hetchy water as it rushed to the Peninsula for the first time. An adequate supply of high-quality drinking water was finally a reality for the Bay Area. . This historical marker was erected by Hetch Hetchy Regional Water System. It is in Woodside in San Mateo County California

Here on October 28, 1934, an eager audience celebrated the roar of Hetch Hetchy water as it rushed to the Peninsula for the first time. An adequate supply of high-quality drinking water was finally a reality for the Bay Area.

Topics. This historical marker is listed in these topic lists: Charity & Public Work • Waterways & Vessels. A significant historical date for this entry is October 28, 1934.

Location. 37° 29.012′ N, 122° 19.021′ W. Marker is in Woodside, California, in San Mateo County. Marker can be reached from Cañada Road near Edgewood Road, on the right when traveling east. Touch for map. Marker is at or near this postal address: 80 Cañada Road, Redwood City CA 94062, United States of America. Touch for directions. 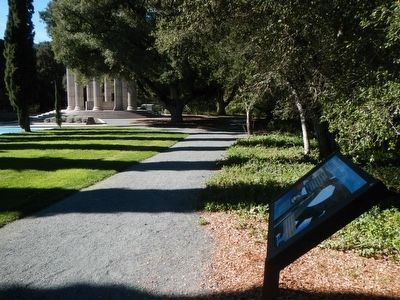 Photographed By Barry Swackhamer, February 15, 2016
2. A Monument to Water Marker
The Plugas Water Temple is in the background.

More about this marker. This marker is located at the Plugas Water Temple

Also see . . .  Hetch Hetchy - Wikipedia. In 1906, after a major earthquake and subsequent fire that devastated San Francisco, the inadequacy of the city's water system was made tragically clear. San Francisco applied to the United States Department of the Interior to gain water rights to Hetch Hetchy...In 1923, the O'Shaughnessy Dam was completed on the Tuolumne River, flooding the entire valley under the Hetch Hetchy Reservoir.] The dam and reservoir are the centerpiece of the Hetch Hetchy Project, which in 1934 began to deliver water 167 miles (269 km) west to San Francisco and its client municipalities in the greater San Francisco Bay Area. (Submitted on February 20, 2016, by Barry Swackhamer of Brentwood, California.) 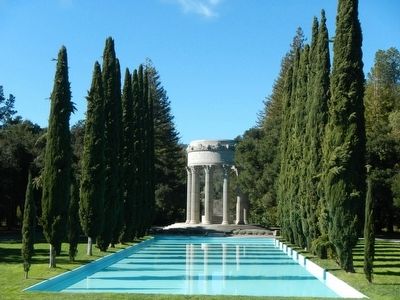 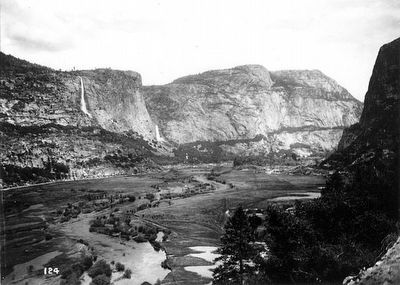 Photographed By Wikipedia, circa early 1900
4. Hetch Hetchy Valley before the Tuolumne River was dammed.