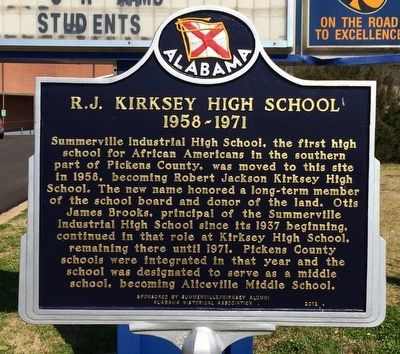 Summerville Industrial High School, the first high school for African Americans in the southern part of Pickens County, was moved to this site in 1958, becoming Robert Jackson Kirksey High School. The new name honored a long-term member of the school board and donor of the land. Otis James Brooks, principal of the Summerville Industrial High School since its 1937 beginning, continued in that role at Kirksey High School, remaining there until 1971. Pickens County schools were integrated in that year and the school was designated to serve as a middle school, becoming Aliceville Middle School.

Topics. This historical marker is listed in these topic lists: African Americans • Education. A significant historical year for this entry is 1958.

Location. 33° 8.189′ N, 88° 9.375′ W. Marker is in Aliceville, Alabama, in Pickens County. Marker can be reached from the intersection of Columbus Road (Alabama Route 14) and 10th Avenue Northwest, on the right when traveling north. Touch for map. 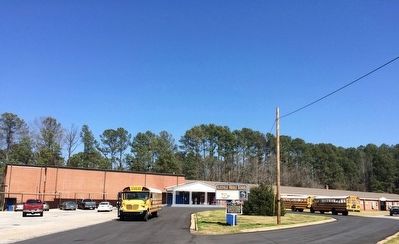 Click or scan to see
this page online
Marker is at or near this postal address: 1000 Columbus Road, Aliceville AL 35442, United States of America. Touch for directions. 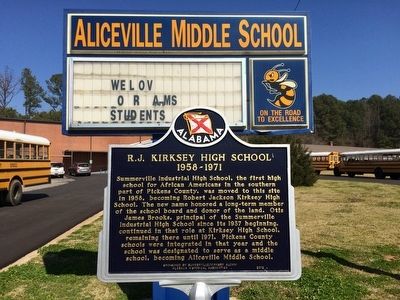