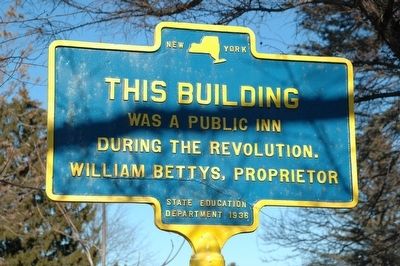 Photographed By Howard C. Ohlhous, February 18, 2016
1. William Bettys Inn Marker
Inscription.
Inn of William Bettys. .
This Building Was A Public Inn During the Revolution. William Bettys, Proprietor . . This historical marker was erected in 1936 by New York State Education Department. It is in Ballston in Saratoga County New York

This Building
Was A Public Inn
During the Revolution.
William Bettys, Proprietor 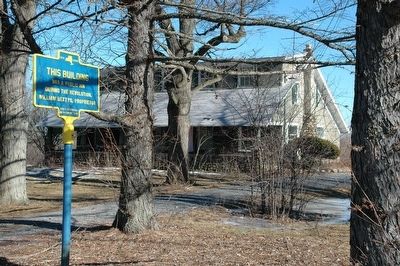 Click or scan to see
this page online
(approx. 0.7 miles away); Waterman House (approx. one mile away). Touch for a list and map of all markers in Ballston.

Regarding Inn of William Bettys. Bettys Tavern served not only travelers on their journeys but also locals. Many people were familiar with William Bettys who ran the inn, situated in territory that was primarily Loyalist during the American Revolution.

Unfortunately for the owner, his son, Joe, sided with the Rebels and eventually became a traitor to his cause, resulting in Joe's death by hanging.

This tavern, located on present-day Route 50, is still recognizable as an old inn by the tiny rooms upstairs, rooms that would have been used by travelers overnight.

The bar was located on the first floor, in a room that today serves as the living room of a residence.
By Rick Reynolds, Ballston Historian

Related marker. Click here for another marker that is related to this marker. Bettys Family