The House of the Rectory 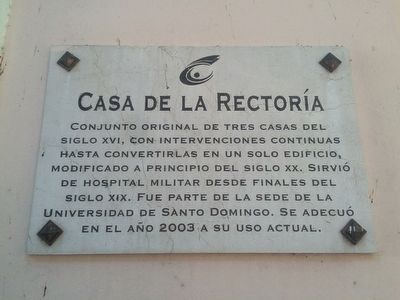 Photographed By J. Makali Bruton, January 17, 2016
1. The House of the Rectory Marker
Inscription.
English translation: , Originally this was a group of three houses from the 16th century, which were modified continuously until converted into one building around the beginning of the 20th century. It served as a military hospital starting during the end of the 19th century. It also formed part of the University of Santo Domingo. In 2003 it was modified for its present use. . This historical marker is in Ciudad Colonial in Santo Domingo Distrito Nacional Dominican Republic