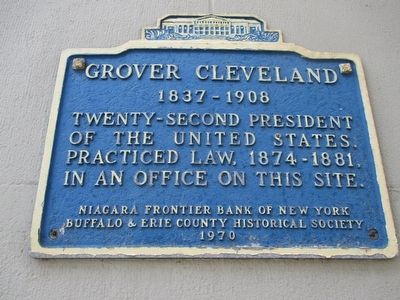 Photographed By Anton Schwarzmueller, February 28, 2016
1. Grover Cleveland Marker
Inscription.
Grover Cleveland, 1837 - 1908, twenty-second President of the United States. Practiced law, 1874-1881, in an office on this site. . This historical marker was erected in 1970 by Niagara Frontier Bank of New York, Buffalo and Erie County Historical Society. It is in Buffalo in Erie County New York

Topics and series. This historical marker is listed in this topic list: Government & Politics. In addition, it is included in the Former U.S. Presidents: #22 and #24 Grover Cleveland series list. A significant historical year for this entry is 1837.

Location. 42° 52.93′ N, 78° 52.542′ W. Marker is in Buffalo, New York, in Erie County. Marker is at the intersection of Main Street and West Swan Street, on the right when traveling south on Main Street. Marker is fixed to the Main Street side of the Fidelity Trust Building, now called Swan Tower. This part of Main Street is closed to vehicular traffic due to the light rail train service occupying the street. Touch for map. Marker is at or near this postal address: 290 Main Street, Buffalo NY 14202, United States of America. Touch for directions. 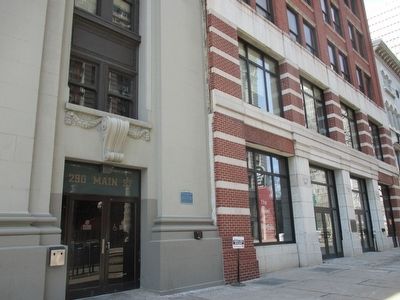 Photographed By Anton Schwarzmueller, February 28, 2016
2. Marker by Door
Marker is away from the intersection, by this north door to the building, Main Street side.

More about this marker. The figure at the top of the marker is the Buffalo History Museum. 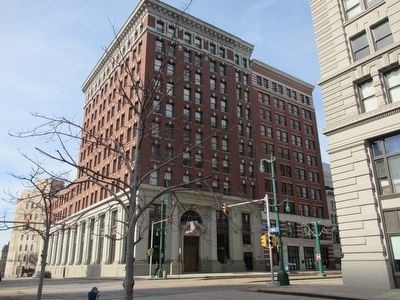