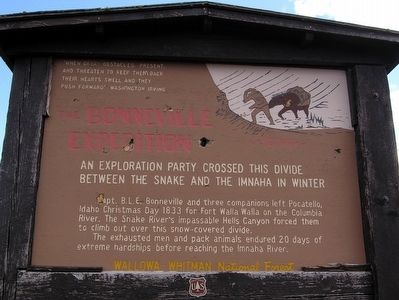 Photographed By Duane Hall, September 10, 2010
1. The Bonneville Expedition Marker
Inscription.
The Bonneville Expedition. . , "When great obstacles present, and threaten to keep them back, their hearts swell, and they push forward" Washington Irving, An exploration party crossed this divide between the Snake and the Imnaha in winter., Capt. B.L.E. Bonneville and three companions left Pocatello, Idaho Christmas Day 1833 for Fort Walla Walla on the Columbia River. The Snake River's impassable Hells Canyon forced them to climb out over this snow-covered divide., The exhausted men and pack animals endured 20 days of extreme hardships before reaching the Imnaha River. . This historical marker was erected by Wallowa - Whitman National Forest. It is Near Imnaha in Wallowa County Oregon

"When great obstacles present, and threaten to keep them back, their hearts swell, and they push forward" Washington Irving

An exploration party crossed this divide between the Snake and the Imnaha in winter.

The exhausted men and pack animals endured 20 days of extreme hardships before reaching the Imnaha River.

Topics. This historical marker is listed in this topic list: Exploration. A significant historical date for this entry is December 25, 1833.

Other nearby markers. At least 4 other markers are within 6 miles of this marker, measured as the crow flies. A Story Written in Stone 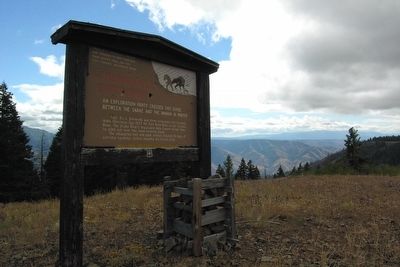 Regarding The Bonneville Expedition. The expedition to explore what became Oregon left Missouri with 110 men in May 1832 with Benjamin Louis Eulalie de Bonneville in command. He returned to Independence, Missouri, in August 1835. From Bonneville’s tales, maps and notes, Washington Irving wrote The Adventures of Captain Bonneville published in 1837.

Also see . . .
1. Wikipedia Entry for Benjamin Bonneville. “On the way to Washington, D.C., he stopped in New York City where he was received by his patron John Jacob Astor. While staying with Astor, Bonneville met Washington Irving. Bonneville regaled Irving with tales of his adventures, tales that Bonneville planned to include in a book he was working on. “A month or two later, Irving visited Bonneville again, at the D.C. barracks where the latter was staying. Bonneville was having difficulties writing his adventures. The two of them agreed that for the sum of $1000, Bonneville would turn over his maps and notes so that Irving could use them as the basis for his third ‘Western’ book. The result was The Adventures 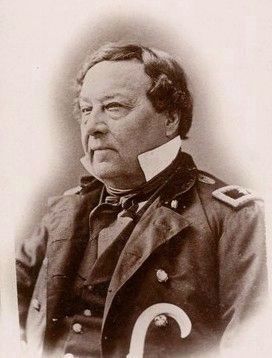 2. The Adventures of Captain Bonneville. Book by Washington Irving on Amazon.com. The book is still quite engaging and a low-price Kindle edition is available. (Submitted on December 16, 2017.)

Additional commentary.
1. Directions to Marker
To reach the marker, start from the Hells Canyon Overlook. (Visit the USFS website on the Hells Canyon Overlook for directions and information on whether the overlook is open.) From the overlook parking lot, take a right and proceed north on National Forest Road 490 for 2.75 miles to the intersection with National Forest Road 3965. Stay to the right and continue north on NF-3965 for 4.5 miles. Look to the right side of the road, and the marker will be 400 feet to the east near the ridgeline. The roads from Hells Canyon Overlook to the marker are one-lane dirt/gravel roads that may cause difficulties for some vehicles.
— Submitted March 9, 2016.
Credits. This page was last revised on December 16, 2017. It was originally submitted on March 9, 2016, by Duane Hall of Abilene, Texas. This page has been viewed 481 times since then and 49 times this year. It was the Marker of the Week December 24, 2017. Photos:   1, 2. submitted on March 9, 2016, by Duane Hall of Abilene, Texas.   3. submitted on December 16, 2017, by J. J. Prats of Powell, Ohio.
Share this page.