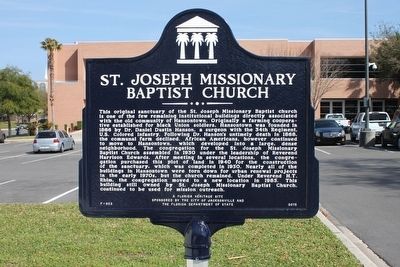 This original sanctuary of the St. Joseph Missionary Baptist Church is one of the few remaining institutional buildings directly associated with the old community of Hansontown. Originally a farming cooperative established for black Union soldiers, Hansontown was founded in 1866 by Dr. Daniel Dustin Hanson, a surgeon with the 34th Regiment, U.S. Colored Infantry. Following Dr. Hanson's untimely death in 1868, the communal farm declined. African Americans, however continued to move to Hansontown, which developed into a large, dense neighborhood. The congregation for the St. Joseph Missionary Baptist Church assembled in 1930 under the leadership of Reverend Harrison Edwards. After meeting in several locations, the congregation purchased this plot of land in 1940 for the construction of the sanctuary, which was completed in 1950. Nearly all of the buildings in Hansontown were torn down for urban renewal projects in the early 1970s, but the church remained. Under Reverend H.T. Rhim, the congregation moved to a new location in 1985. This building still owned by St. Joseph Missionary Baptist Church, continued to be used for mission outreach. 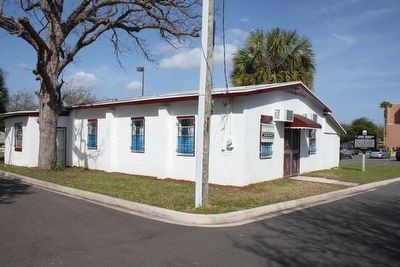 Click or scan to see
this page online
2015 by The City of Jacksonville and the Florida Department of State. (Marker Number F-853.)

Topics. This historical marker is listed in these topic lists: African Americans • Churches & Religion. A significant historical year for this entry is 1866.

Location. 30° 20.176′ N, 81° 39.734′ W. Marker is in Jacksonville, Florida, in Duval County. Marker is on Broad Street, 0.1 miles south of West 1st Street, on the right when traveling north. This marker is located in the student parking area of Florida State College in front of the church building. Touch for map. Marker is in this post office area: Jacksonville FL 32202, United States of America. Touch for directions.