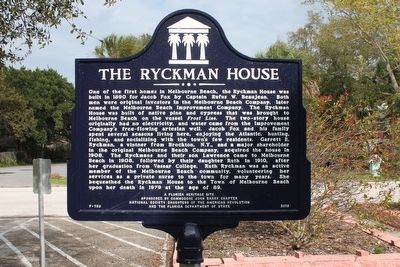 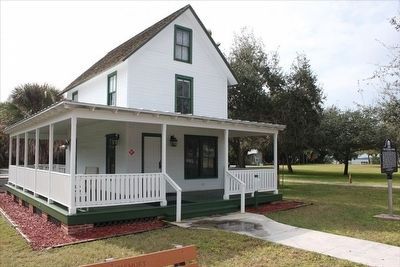 Photographed By Tim Fillmon, January 24, 2015
2. The Ryckman House with marker

Click or scan to see
this page online
at the age of 89.

Topics. This historical marker is listed in these topic lists: Settlements & Settlers • Waterways & Vessels. A significant historical year for this entry is 1890.

Location. 28° 4.097′ N, 80° 33.892′ W. Marker is in Melbourne Beach, Florida, in Brevard County. Marker is on Ocean Aveune east of Riverside Drive, on the left when traveling west. Touch for map. Marker is at or near this postal address: 507 Ocean Avenue, Melbourne Beach FL 32951, United States of America. Touch for directions.

Other nearby markers. At least 8 other markers are within 2 miles of this marker, measured as the crow flies. The Villa Marine (within shouting distance of this marker); Melbourne & Atlantic Railroad (about 300 feet away, measured in a direct line); Melbourne Beach Pier (about 300 feet away); Community Chapel of Melbourne Beach Florida (about 500 feet away); Myrtle Cottage (about 600 feet away); Old Melbourne Beach Town Hall (approx. 1½ miles away); Indialantic Casino (approx. 1.7 miles away); Billy Wallace House (approx. 2 miles away). Touch for a list and map of all markers in Melbourne Beach.
Credits. This page was last revised on January 26, 2020. It was originally submitted on March 20, 2016, by Tim Fillmon of Webster, Florida. This page has been viewed 873 times since then and 211 times this year. Photos:   1, 2. submitted on March 20, 2016, by Tim Fillmon of Webster, Florida. • Bernard Fisher was the editor who published this page.
Share this page.