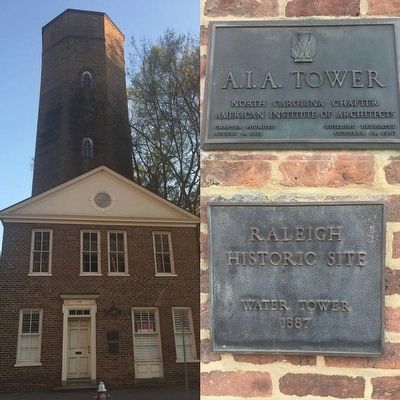 Topics. This historical marker is listed in these topic lists: Architecture • Man-Made Features. A significant historical year for this entry is 1887.

Regarding A.I.A Tower. The Raleigh Water Tower is a historic building that was the first water tower built in Raleigh, North Carolina. Constructed in 1887, the City of Raleigh relied on the tower for 37 years until it was decommissioned in 1924. Formerly, the building was used as the headquarters for the North Carolina Chapter of the American Institute of Architects(AIA)
Credits. This page was last revised on June 16, 2016. It was originally submitted on March 22, 2016. This page has been viewed 311 times since then and 23 times this year. Photo   1. submitted on March 22, 2016, by Destiny Branch of Raleigh, North Carolina. • Bernard Fisher was the editor who published this page.
Share this page.