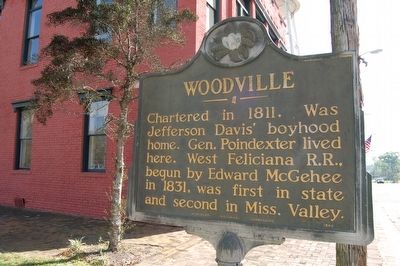 March 25, 2016
1. Woodville Marker
Inscription.
Woodville. . Chartered in 1811. Was Jefferson Davis' boyhood home. Gen. Poindexter lived here. West Feleciana R.R., begun by Edward McGehee in 1831. was first in state and second in Miss. Valley. . This historical marker was erected in 1949 by Mississippi Historical Commission. It is in Woodville in Wilkinson County Mississippi

Topics and series. This historical marker is listed in these topic lists: Railroads & Streetcars • Settlements & Settlers. In addition, it is included in the Mississippi State Historical Marker Program series list. A significant historical year for this entry is 1811.

Location. 31° 6.252′ N, 91° 17.948′ W. Marker is in Woodville, Mississippi, in Wilkinson County. Marker is at the intersection of Main Street (State Highway 24) and Ford's Creek Road, on the right when traveling west on Main Street. Touch for map. Marker is at or near this postal address: 510 Main Street, Woodville MS 39669, United States of America. Touch for directions. 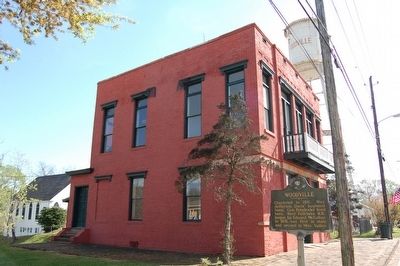