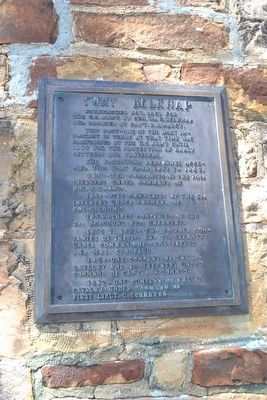 Topics and series. This historical marker is listed in these topic lists: Forts and Castles • Wars, US Indian 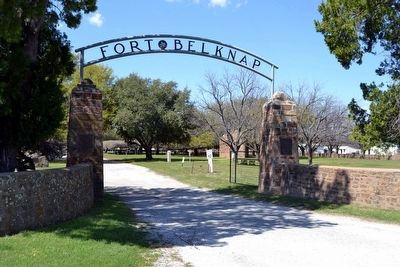 Photographed By Duane Hall, March 23, 2016
2. Entrance to Fort Belknap Park
Marker is mounted on the right (north) pillar of the entrance arch

Click or scan to see
this page online
. In addition, it is included in the National Historic Landmarks series list. A significant historical month for this entry is November 1851.

Location. 33° 9.081′ N, 98° 44.406′ W. Marker is near Newcastle, Texas, in Young County. Marker can be reached from Farm to Market Road 61 south of Thompson Road, on the right when traveling south. Marker is located on the northern pillar of the arch entrance to Fort Belknap park. Touch for map. Marker is in this post office area: Newcastle TX 76372, United States of America. Touch for directions.

More about this marker. There is a Texas state historical marker medallion on the arch of the entrance; the Texas Historical Commission has assigned Marker Number 1959 to it.