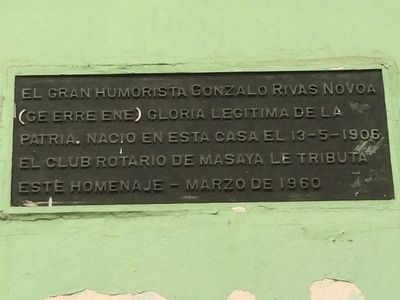 English translation:
The great humorist Gonzalo Rivas Novoa (known by his initials, GRN) the nation was legitimately honored by him. He was born in this house on May 13, 1906
The Rotary Club of Masaya honors him with this tribute - March 1960

Topics. This historical marker is listed in these topic lists: Arts, Letters, Music • Entertainment. A significant historical date for this entry is May 13, 1906.

Location. 11° 58.585′ N, 86° 5.808′ W. Marker is in Masaya. Marker is on Calle a San Jerónimo, on the right when traveling north. The marker is along a wall almost directly across the street from the Masaya Mayor´s Office. Touch for map. Touch for directions.

Other nearby markers. At least 8 other markers are within 18 kilometers of this marker, measured as the crow flies. Masaya Boy's School (within shouting distance of this marker); General Rigoberto Cabezas (about 240 meters away, measured in a direct line); Here Were Shot Four Patriots 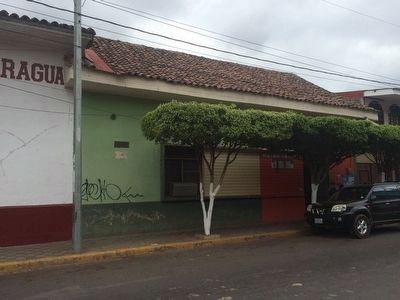