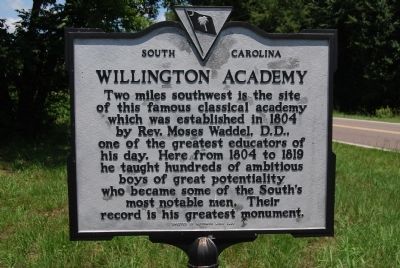 Photographed By Brian Scott, July 19, 2008
1. Willington Academy Marker
Inscription.
Willington Academy. . , Two miles southwest is the site of the famous classical academy which was established in 1804 by Rev. Moses Waddel, D.D., one of the greatest educators of his day. Here from 1804-1819 he taught hundreds of ambitious boys of great potentiality who became some of the South's most notable men. Their record is his greatest monument. . This historical marker was erected in 1962 by McCormick Lions Club. It is in Willington in McCormick County South Carolina

Two miles southwest is the site of the famous classical academy which was established in 1804 by Rev. Moses Waddel, D.D., one of the greatest educators of his day. Here from 1804-1819 he taught hundreds of ambitious boys of great potentiality who became some of the South's most notable men. Their record is his greatest monument.

Topics. This historical marker is listed in these topic lists: Churches & Religion • Education. A significant historical year for this entry is 1804. 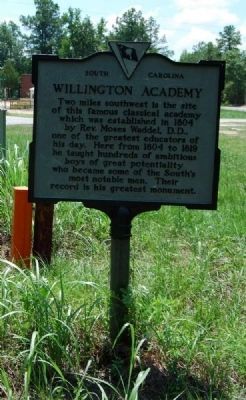 Also see . . .
1. James Louis Petigru, the Willington Academy, and Their Enduring Lessons for South Carolina. One of the Calhoun Lecture Series, given January 24, 2006. (Submitted on July 20, 2008, by Brian Scott of Anderson, South Carolina.)

Additional commentary.
1. Willington Academy
The Willington Academy, which had been first established by Dr. Waddell at Vienna, in Carolina, a short distance from its subsequent site, has been described by one who was familiar with it, as having become 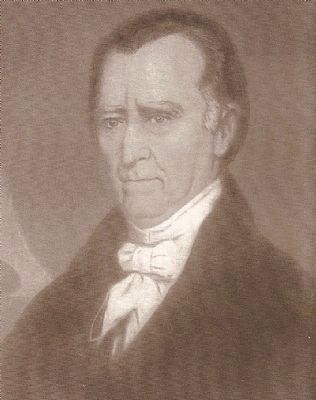 The Making of McCormick County by Bobby F. Edmonds
3. Moses Waddel
(1770-1840)
famous all over the South. Says this writer:

After Dr. Waddell was forced from age and disability, to give up teaching, the school was revived by his sons, James and John Waddell, but under the general supervision of the old schoolmaster. No doubt his sons followed their father's plan of teaching, and as I was, when a boy, long an inmate of Moses Waddell's family, and a pupil at the Willington Academy, it may not be unentertaining to give a short account of the old Willington schoolhouse, as we had it from tradition. The boys boarded at farmhouses in the neighborhood or lived in log huts in the woods near the Academy, furnishing their own supplies. At sunrise Dr. Waddell was wont to wind his horn, which was immediately answered by horns in all directions. At an early hour the pupils made their appearance at the log cabin schoolhouse. The Doctor, entering the cabin and depositing his hat, would reappear at the door with this school horn in his hand. He then would call out loud, "What boy feels most flatulent this morning?"

After the horn had been sounded by some lucky youth, the school-boys came in to listen to a short set form of prayer.

After prayers the pupils, each with a chair bearing his name sculpted in the back of it, retired to the woods for study, the classes being divided into squads according to individual preference. In the spring and summer 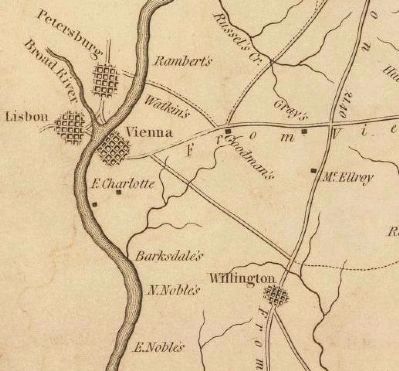 Photographed By Mill's Atlas of 1825, 1825
4. Detail of Fort Vienna-Willington Vicinity
months these squads scattered through the oak and hickory woods in quest of shade; but in cold weather the first thing done by them was to kindle log-heap fires. Whosoever imagines that the boys did not study as well as they would have done under the immediate eye of the teacher is mistaken. I have been to many schools conducted according to various systems of education, but nowhere have I seen such assiduity in study, nowhere have I ever witnessed such emulation to excel. It was a classical school. The multiplicity of studies now advertised at fashionable academies was unknown in those early times. The debating club on Friday afternoons was an important institution, and regarded by the teacher as a very necessary part of his scholastic system, for to converse and speak in public were esteemed necessary accomplishments to Southern youths.

Of the famous schoolmaster, whose sons succeeded him in the school where the methods of their father's system were still continued in Curry's day at Willington, Mr. Calhoun long afterwards wrote as follows:—

In that character (as a teacher) he stands almost unrivaled. He may be justly considered as the father of classical education in the upper country of South Carolina and Georgia. His excellence in that character depended not so much on extensive or profound learning as a felicitous combination of qualities for the government 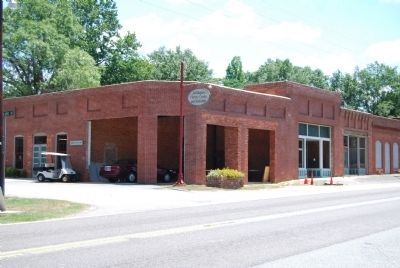 Photographed By Brian Scott, July 19, 2008
5. Willington History Center and Bookshop
Located across the street from the Cherry Hill / Noble Cemetery and Willington Academy markers.
of boys and communicating to them what he knew. He was particularly successful in exciting emulation amongst them, and in obtaining the good will of all except the worthless. The best evidence of his high qualities as a teacher is his success. Among his pupils are to be found a large portion of the eminent men in this state and Georgia. In this state it is sufficient to name McDuffie, Legare, Petigru, and my colleague, Butler. To these many others of distinction might be added. His pupils in Georgia who have distinguished themselves are numerous. In the list are to be found the names of William H. Crawford, Longstreet, etc. It is in his character of a teacher, especially, that he will long be remembered as a benefactor of the country.

During the year of Curry's stay at Willington an event of great importance in the eyes of the pupils was the visit to the school of the famous Siamese twins, Chang and Eng, who were then making their first tour in America. He makes record among his memoranda of seeing the twins at Willington. They seemed, he says, to be about seventeen years old; and cheerful and very agile.

"Cherry Hill," the home of George McDuffie, was near the Willington Academy; and was a favorite resort of the boys on Saturdays. McDuffie's distinguished career in the United States House of Representatives ended during the year of Curry's pupilage at Willington; and in the same year he was elected Governor of South Carolina. In 1842 he was chosen to the Senate, and was in the forefront of the forensic and political debates and contests of the period in that body.

It remains to be added, in connection with Curry's life at Willington, that both the sons of Moses Waddell, James Pleasants Waddell and John Newton Waddell, became eminent in their chosen profession as educators,—the former filling with success and distinction the chairs of Latin and Greek in the University of Georgia, where Curry records of him that he treated his old pupil with a fatherly care and kindness during the latter's career as a student; while John Newton Waddell became professor of Latin and Greek in the University of Mississippi, and later its Chancellor. (Source: J.L.M. Curry: a Biography by Edwin Anderson Alderman and Armistead Churchill Gordon (1911), pgs 22-25.)
— Submitted November 28, 2009, by Brian Scott of Anderson, South Carolina.
2. Moses Waddel and the Willington Academy in South Carolina
One morning in the late autumn of the year 1794, a Presbyterian preacher left the Georgia side of the Savannah River and crossed over to South Carolina. He was of low stature and had a boyish face, for he was only twenty-four years of age. He rode to a schoolhouse that stood in the Calhoun Settlement, on Long Cane Creek, in Abbeville District, and found assembled there a company of Scotch-Irish people. When he arose to speak, the congregation was surprised to hear a deep-toned, musical voice. The preacher's calm, gray eyes looked straight into their eyes and his earnest, rapid talking caught their attention. When the sermon was ended, Patrick Calhoun, patriarch of the community and elder in the neighboring church, led the minister to his home. While they were seated, that evening, around the wide, old-fashioned fire-place in the Calhoun home, the door was opened and a youthful face looked in, but was at once withdrawn. The face belonged to John Caldwell Calhoun, Patrick Calhoun's son, who afterwards became South Carolina's great statesman. A year later, the young minister, whose name was Moses Waddel, married Catharine Calhoun, sister of John C. Calhoun, and took her to his home beyond the Savannah. There, in Georgia, Waddel was preaching the gospel and teaching Latin and Greek to a group of schoolboys.

Moses Waddel was born (1770) in Iredell County, North Carolina. His parents were Scots from North Ireland. Soon after Moses completed his eighth year he went to James Hall's school and began to study Latin. After six years of work, he finished the courses of study in Greek, Latin and mathematics, as far as these subjects were taught in the school. Then he took charge of various schools in North Carolina and Georgia until the year 1789, when he gave his heart to Christ. After a long struggle within his own breast, young Waddel determined to become a preacher. In the autumn of 1790, therefore, he mounted his horse and made the long journey from Georgia to Virginia. In the month of September in that year he began a course of study at Hampden Sidney College. A little more than a year later he left the college, and in May, 1772, was licensed by Hanover Presbytery to preach the gospel. The year 1794 found him established as pastor of Carmel Church, south of the Savannah. At the same time he organized a school in Columbia County, Georgia. Near the close of that year he crossed the Savannah, as we have seen, and there met Catharine Calhoun, who became his wife and his helper in the Georgia school. In 1801 Waddel moved his home to Abbeville District, South Carolina, and there opened his school in the village of Vienna. A little later, however, he selected a site upon a ridge near the Calhoun Settlement. There, among oak and hickory trees, he erected a log house and called it Willington Academy. Log cabins for the students were put up near the main building. For a long period of time, as many as one hundred and eighty students came each year to receive instruction from this wonderful teacher, Moses Waddel.

The food furnished to the students in Waddel's log college was plain, for it was usually nothing more than cornbread and bacon. A blast from a ram's horn called them all together for morning and evening prayers. When the weather was mild the students sat or lay beneath the trees to prepare their lessons. The sound of the horn told the class in Homer when to assemble, and all of the members of it rushed at once to the recitation hall in the main building. Then the horn called up, in regular order, the Cicero, the Horace and the Virgil classes, as well as those engaged in the study of mathematics and English.

Waddel had a clear mind and a strong will. He gave his pupils an admirable training in all of their studies. Moreover, he held them under his own absolute control through strict discipline. The master loved each pupil. He governed them with love and with impartial justice.

A large company of ministers received their entire training in Waddel's school. Of these we may name Richard B. Cater, John H. Gray, David Humphreys, James Gamble, James C. Patterson and Thomas D. Baird. Some famous scholars and statesmen also were educated in this log college, among whom were William H. Crawford, Howell Cobb and A. B. Longstreet, of Georgia, and John C. Calhoun, Hugh S. Legare, James L. Petigru, George McDuffie, and many others, of South Carolina.

The Willington school building was also a church. Waddel preached every Sunday to his students and to the people of the community. In 1809 these worshippers were regularly organized as a Presbyterian Church. A revival of religion took place there and many of the students became Christians.