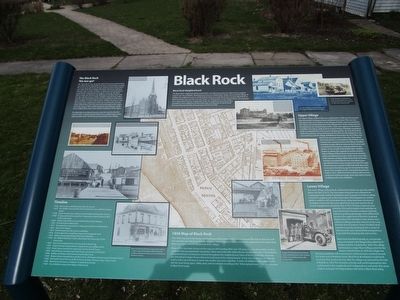 The Black Rock 'Kis-tan-goi' The "Black Rock" was a large flat shelf of limestone and chert that extended into the Niagara River forming a natural harbor and pier. The rock was located near the foot of present day School Street just north of the Peace Bridge. The Native Americans had been coming to the rock for centuries to obtain the raw material necessary for the manufacture of weapons and tools. This black chert, of flint, was found on the bluff above the Black Rock and was the only local source of this valuable material. 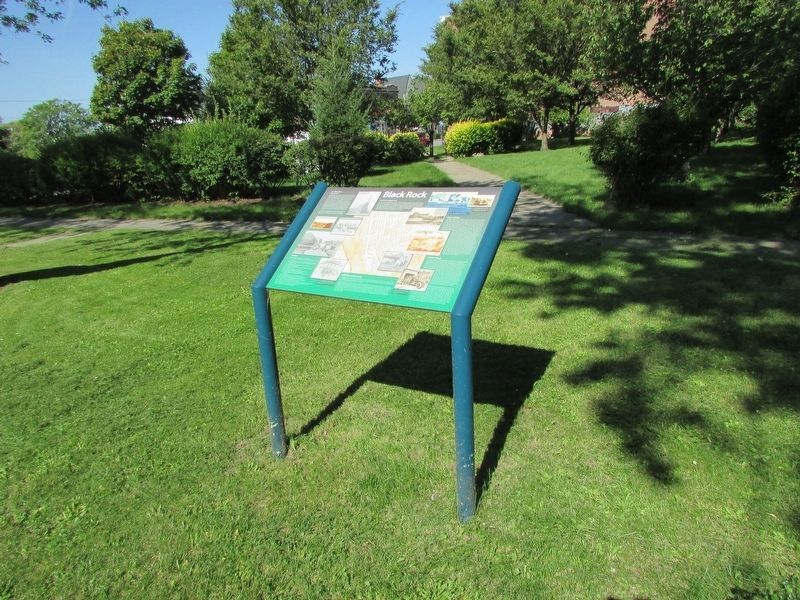 Click or scan to see
this page online
Early settlers near the rock reported the ground was heavily littered with stone chips and flakes, a result of generations of Native Americans manufacturing stone implements at the site. Arrowheads and tools made of Black Rock chert have been found throughout the region and as far away as Ohio and Pennsylvania indicating the significance of Black Rock chert to the earliest inhabitants of the region.

The Black Rock was blasted away to clear the route for the Erie Canal in 1825. A small remnant of the rock is visible today on the right shoulder of the 190 North just beyond the Peace Bridge. 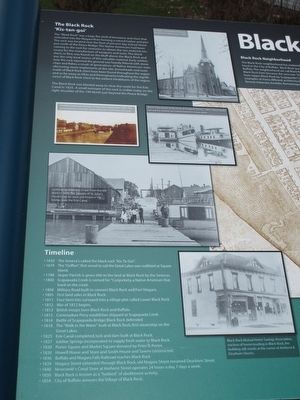 1856 Map of Black Rock
This 1856 map shows the homes and buildings in the center of the Village of Lower Black Rock. Note the mill race and dam near the foot of Amherst Street. The exploitation of the waterpower generated at the Black Rock Dam was responsible for the growth of the village.

Many of the structures shown on the map are still standing after over 150 years but are obscured by modern materials and unsympathetic renovations. Most were built with timber frames sheathed in wide vertical planks, the predominant construction method throughout the neighborhood. Some of these small early structures are imbedded in larger homes 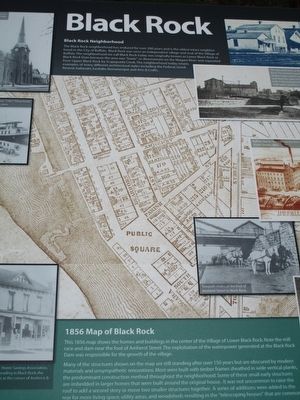 Photographed By Anton Schwarzmueller, April 10, 2016
4. Center
that were built around the original house. It was not uncommon to raise the roof to add a second story or move two smaller structures together. A series of additions were added to the rear for more living space, utility areas, and woodsheds resulting in the "telescoping houses" that are common in Black Rock today. 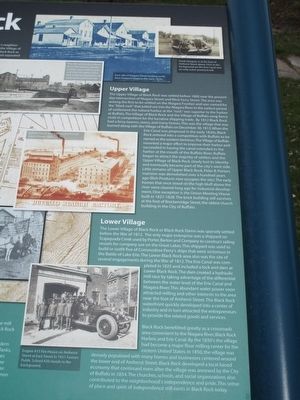 Photographed By Anton Schwarzmueller, April 10, 2016
5. Right
lost its identity and eventually became part of the city's west side. Little remains of Upper Black Rock. Peter B. Porter's mansion was demolished over a hundred years ago (Rich Products now occupies the site). The early homes that once stood on the high bluff above the river were cleared long ago for industrial development. One exception is the Union Meeting House built in 1827-1828. The brick building still survives at the foot of Breckenridge Street, the oldest church building in the City of Buffalo.

Lower Village
The Lower Village of Black Rock or Black Rock Dam was sparsely settled before the War of 1812. The only major enterprise was a shipyard on Scajaquada Creek used by Porter, Baron and Company to construct sailing vessels for company use on the Great Lakes. This shipyard was used to build or outfit five of Commodore Perry's ships that were victorious in the battle of Lake Erie. The Lower Black Rock area was also the site of several engagements during the War of 1812. The Erie Canal was completed in 1825 and included a lock and dam at Lower Black Rock. The dam created a hydraulic mill race by taking advantage of the differential between the water level of the Erie Canal and Niagara River. This abundant water power soon attratced milling and other interests to the area near the foot of Amherst Street. The Black Rock waterfront quickly developed into a 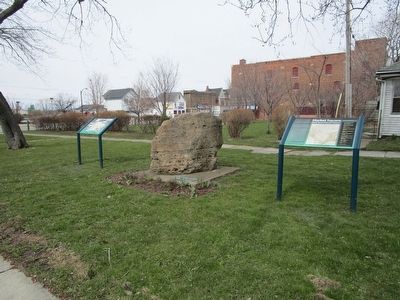 Photographed By Anton Schwarzmueller, April 10, 2016
6. This is the Left Marker
Markers face south on Amherst Street.
center of industry and in turn attacted the entrepreneurs to provide the related goods and services.

Black Rock benefitted greatly as a crossroads area convenient to the Niagara River, Black Rock Harbor, and Erie Canal. By the 1830's the village has become a major flour milling center for the eastern United States. In 1850, the village was densely populated with many homes and businesses centered around the lower end of Amherst Street. Black Rock developed a local based economy that continued even after the village was annexed by the City of Buffalo in 1854. The churches, schools, and social oranizations also contributed to the neighborhood's independence and pride. This sense of place and spirit of independence still exists in Black Rock today.

[captions]
‹St. John's Evangelical Church, 85 Amherst Street, circa 1900.
‹The Erie Canal near the foot of Hamilton Street, circa 1900. The old canal bed is now the route of the New York State Thruway.
‹River Party boats at the foot of Amherst Street - 1907. These boats served the resorts on Grand Island for many years.
‹Looking up Amherst Street from the old dock in 1899. The steeple of St. John's Church can be seen just beyond the bridge over the Erie Canal.
‹Black Rock Mutual Home Savings Association, nucleus of homesteading in Black Rock, the building still stands at the corner of Amherst & Dearborn 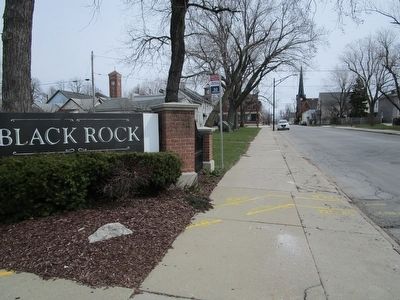 Topics and series. This historical marker is listed in these topic lists: Industry & Commerce • War of 1812 • Waterways & Vessels. In addition, it is included in the Erie Canal series list. A significant historical date for this entry is December 30, 1813.

Location. 42° 56.084′ N, 78° 54.108′ W. Marker is in Buffalo, New York, in Erie County. Marker is at the intersection of Amherst Street and Niagara Street (New York State Route 266), on the left when traveling east on Amherst Street. Touch for map. Marker is in this post office area: Buffalo NY 14207, United States of America. Touch for directions.