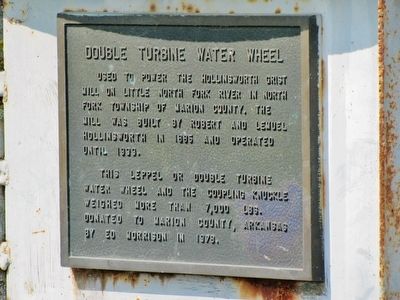 This Leppel or double turbine water wheel and the coupling knuckle weighed more than 7,000 lbs. Donated to Marion County, Arkansas be Ed Morrison in 1978. . This historical marker is in Yellville in Marion County Arkansas

Used to power the Hollinsworth Grist Mill on Little North Fork River in North Fork Township of Marion County. Mill was built by Robert and Lemuel Hollinsworth in 1885 and operated until 1933.

This Leppel or double turbine water wheel and the coupling knuckle weighed more than 7,000 lbs. Donated to Marion County, Arkansas be Ed Morrison in 1978.

Topics. This historical marker is listed in these topic lists: Industry & Commerce • Waterways & Vessels. A significant historical year for this entry is 1885.

Location. 36° 13.545′ N, 92° 40.907′ W. Marker is in Yellville, Arkansas, in Marion County. Marker is at the intersection of U.S. 412 and North Berry Street, on the right when traveling east on U.S. 412. Marker is mounted on the turbine it references, located near the northeast corner of the old Marion County Courthouse grounds. Touch for map. Marker is in this post office area: Yellville AR 72687, United States of America. Touch for directions.

Other nearby markers. At least 8 other markers are within 9 miles of this marker, measured as the crow flies. Marion County (within shouting distance of this marker); In Memory of Corporal Charles L. Gilliland (approx. 0.3 miles away); Yellville In The Civil War / Troops Raised In Marion County 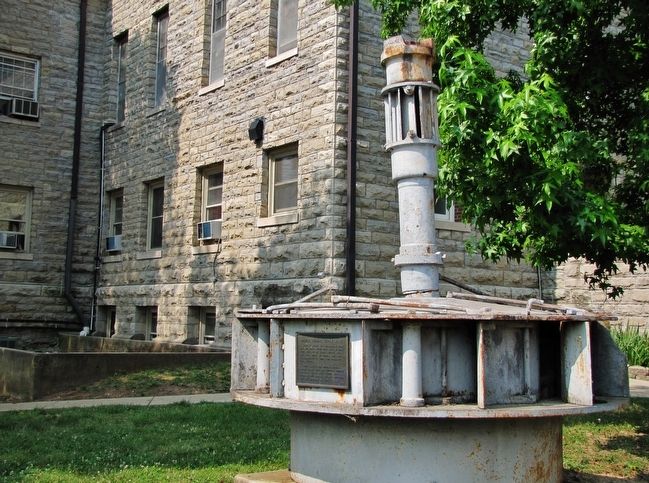 More about this marker.

The marker incorrectly refers to this water wheel as a "Leppel" model, but the correct spelling is actually "Leffel". It was invented and manufactured by James Leffel.

Also see . . .
1. James Leffel's American double turbine water wheel.
Images of this water wheel as it would have looked when operational (Submitted on April 11, 2016, by Cosmos Mariner of Cape Canaveral, Florida.) 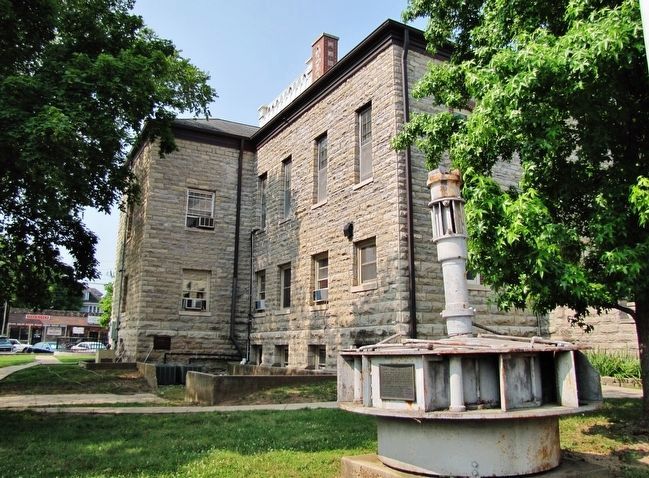