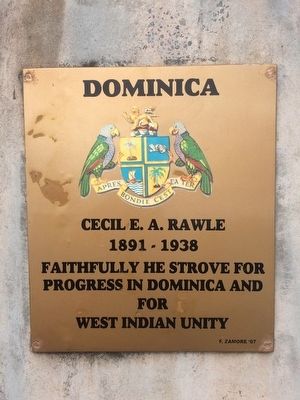 Photographed By J. Makali Bruton, April 14, 2016
1. Cecil E. A. Rawle Marker
Inscription.
Cecil E. A. Rawle. .
Dominica Cecil E. A. Rawle 1891-1938 Faithfully he strove for progress in Dominica and for West Indian Unity. . This historical marker was erected in 2007 by F. Zamore. It is in Roseau Saint George Dominica

Dominica
Cecil E. A. Rawle
1891-1938
Faithfully he strove for
progress in Dominica and
for
West Indian Unity

Regarding Cecil E. A. Rawle. From Wikipedia: Rawle was born in Roseau, Dominica, where his Trinidadian parents, William Alexander 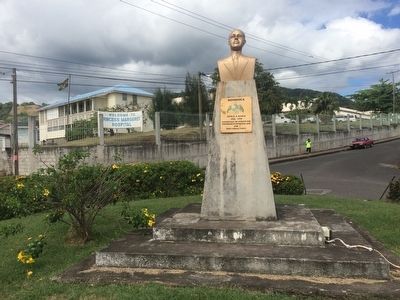 Photographed By J. Makali Bruton, April 14, 2016
2. Cecil E. A. Rawle Marker
The Princess Margaret Hospital can be seen in the background.

Click or scan to see
this page online
Romilly Rawle and Elizabeth Sophia Garrett, had moved. His father was head of the local branch of the West India and Panama Telegraph Company, the precursor of Cable and Wireless. He attended Codrington College in Barbados and then moved to London, where he went on to graduate as a barrister at the Inner Temple in 1913. He practiced law in Grenada and Trinidad, before he returned to Dominica and went on to found the Dominica Representative Government Association. In 1925 a new constitution was granted and Rawle represented Roseau in the first elected legislature. In addition to practicing law, Rawle owned the Dominica Tribune Newspaper, which in 1924 he incorporated with the Dominica Guardian. In 1932 he chaired the Dominica Conference, which became known as the West Indies Conference, at which there were representatives from Trinidad, Barbados, Dominica, Montserrat, St. Lucia, St. Vincent, Antigua, St. Kitts and Grenada. The first regional meeting to be initiated by Caribbean leaders to discuss the future of the region, it led the way for the West Indies Federation.