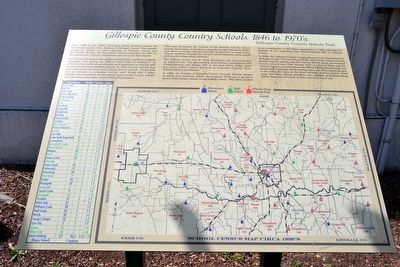 From 1846 to the 1970’s, forty-four school districts served the educational needs of the children of Gillespie County. This marker honors the history of public education in Gillespie County and the Vereins Kirche, the first public school established in 1847 by the Adelsverein. Johann Leyendecker served as the first teacher.

The German heritage of the settlers placed great emphasis on public education even during the difficult early years of settlement. In 1858, five free public school districts were organized, co-existing with several private and parochial schools. In 1896, records indicate that forty-two school districts and a Negro school existed. Instruction was in German in numerous schools until World War I when English was mandated. In the remote areas of the County, schools also served as community centers and polling places.

This map documents the location of the districts and the schoolhouses, the number of teachers and grades taught during the 1930’s and offers an insight into the diversity of education in rural Texas. District numbers indicate the common school districts, while letters indicate the independent 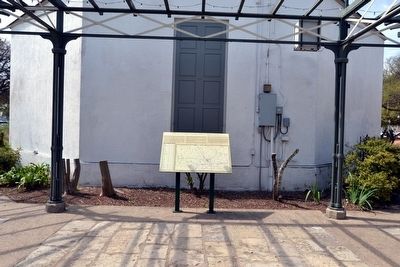 Photographed By Duane Hall, March 26, 2016
2. Marker at the Northeast side of the Vereins Kirche Pioneer Museum

Click or scan to see
this page online
districts.

In 1999, the Friends of Gillespie County Country Schools, former students and residents, began the on-going challenged to preserve twelve of the former schools as community centers. This effort resulted in an amendment to the Texas Constitution in 2001 allowing the transfer of the properties from Fredericksburg ISD to Gillespie County.

In 2006, the Gillespie County Commissioners Court established the Gillespie County Country Schools Trail, which links sixteen of these former historic schools and the Vereins Kirche along one-hundred twenty miles of trail. This “schools’ trail” is a first in Texas and the Nation. Visitors can now explore the different architectural styles and scenic rural landscape. On a rotating basis, one of the schools is open to the public for tours on the first Saturday of every month. Trail maps and Open House schedules are available at Fredericksburg Visitor Information Center or www.historicschools.org.

Topics. This historical marker is listed in this topic list: Education. A significant historical year for this entry is 1846. 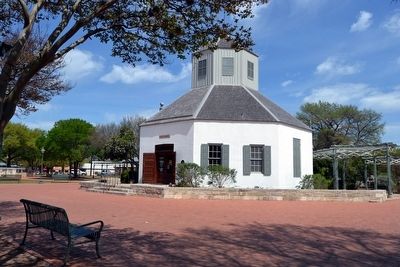 Photographed By Duane Hall, March 26, 2016
3. Replica of the Vereins Kirche
16.58′ N, 98° 52.355′ W. Marker is in Fredericksburg, Texas, in Gillespie County. Marker can be reached from W. Main Street (U.S. 290) west of N. Adams Street. Marker is on the northeast side of the Vereins Kirche Pioneer Museum in the Marktplatz. Touch for map. Marker is in this post office area: Fredericksburg TX 78624, United States of America. Touch for directions.

More about this marker. The marker includes a table of the school districts in Gillespie County in the 1930’s and a map of country schools in the county including those schools along the Gillespie County Country Schools Trail.

Related markers. Click here for a list of markers that are related to this marker. This list of related markers includes historical markers for schools on the Gillespie County Country Schools Trail.