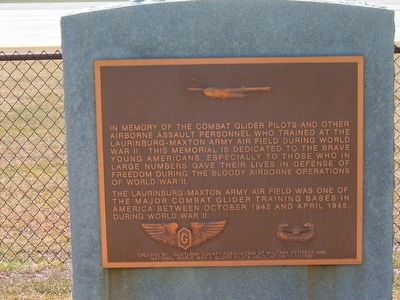 In memory of the combat glider pilots and other airborne assault personnel who trained at the Laurinburg-Maxton Army Air Field during World War II. This memorial is dedicated to those brave young Americans, especially to those who in large numbers gave their lives in defense of freedom during the bloody airborne operations of World War II.

The Laurinburg-Maxton Army Air Field was one of the major combat glider training bases in America between October 1942 and April 1945 during World War II.

Location. 34° 47.805′ N, 79° 22.097′ W. Marker is near Laurinburg, North Carolina, in Scotland County. Memorial can be reached from the intersection of Airport Road (County Route 1434) and Jump Road. Located just north of the Laurinburg-Maxton Airport terminal building. Touch for map. Marker is at or near this postal address: 16701 Airport Rd, Laurinburg NC 28352, United States of America. Touch for directions. 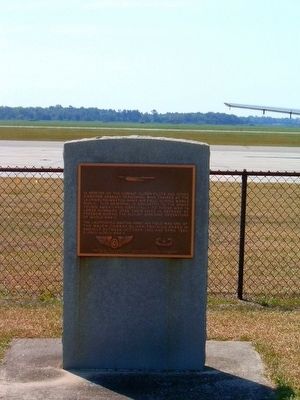