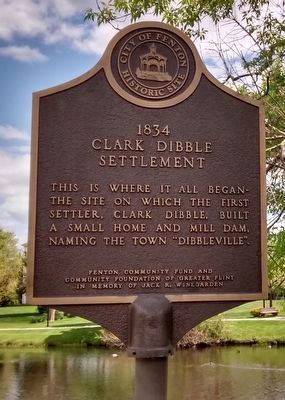 This is where it all began—the site on which the first settler, Clark Dibble, built a small home and mill dam, naming the town "Dibbleville".

Location. 42° 47.648′ N, 83° 42.232′ W. Marker is in Fenton, Michigan, in Genesee County. Marker can be reached from East Ellen Street. The marker is in Millpond Park. It is near the dam, about 200 feet from the parking lot behind Fenton Fire Hall (accessed from East Ellen Street). Touch for map. Marker is at or near this postal address: 201 South Leroy Street, Fenton MI 48430, United States of America. Touch for directions. 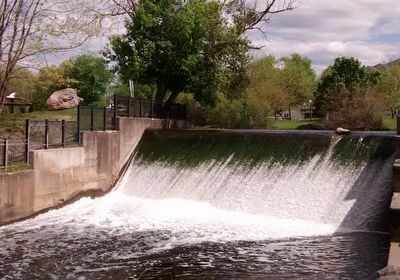 Photographed By Joel S., May 18, 2016
2. 1834 Clark Dibble Settlement Marker
Marker is on opposite bank to the right of the boulder.