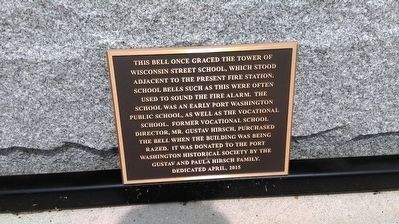 This bell once graced the tower of Wisconsin Street School, which stood adjacent to the present fire station. School bells such as this were often used to sound the fire alarm. The school was an early Port Washington public school, as well as the vocational school. Former vocational school director, Mr. Gustav Hirsch, purchased the bell when the building was being razed. It was donated to the Port Washington Historical Society by the Gustav and Paula Hirsch family. Dedicated April, 2015

Topics and series. This historical marker is listed in these topic lists: Charity & Public Work • Communications • Education. In addition, it is included in the Historic Bells series list. 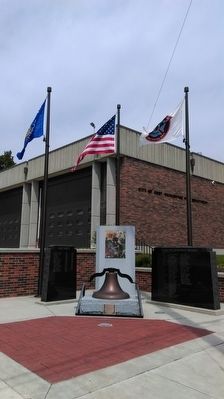 Click or scan to see
this page online
or near this postal address: 104 West Washington Street, Port Washington WI 53074, United States of America. Touch for directions.

More about this marker. The marker is part of the Port Washington Fire Department Memorial. 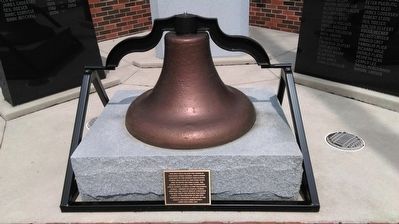