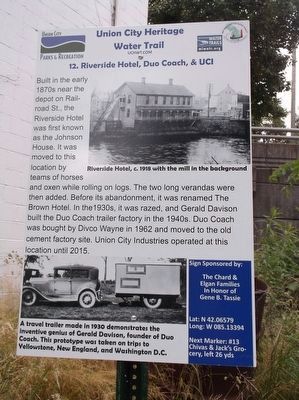 Built in the early 1870s near the depot on Railroad St., the Riverside Hotel was first known as the Johnson House. It was moved to this location by teams of horses and oxen while rolling on logs. The two long verandas were then added. Before its abandonment, it was renamed The Brown Hotel. In the1930s, it was razed, and Gerald Davison built the Duo Coach trailer factory in the 1940s. Duo Coach was bought by Divco Wayne in 1962 and moved to the old cement factory site. Union City Industries operated at this location until 2015.

Topics and series. This historical marker is listed in these topic lists: Architecture • Industry & Commerce. In addition, it is included in the Michigan - Union City Heritage Water Trail series list. A significant historical year for this entry is 1962.

Click or scan to see
this page online
be viewed paddling the St. Joseph River as part of the Union City Heritage Water Trail. It is on the south bank of the river just east of the Broadway Bridge in the south end of the Union City business district. Touch for map. Marker is in this post office area: Union City MI 49094, United States of America. Touch for directions.

More about this marker. There are 28 of these markers comprising the Union City Heritage Water Trail on the Coldwater River and the St. Joseph River launched in 2016 for the village's Sesquicentennial. These markers can be viewed by paddling the 5 mile stretch of river from the JP Palmer Launch in the Village of Union City to the Riley Dam on the SW Corner of Union Lake. Most of these markers CANNOT by accessed by foot as they are on private property along the river. Please do not trespass. More details can be found at www.uchwt.com
Credits. This page was last revised on April 9, 2022. It was originally submitted on June 16, 2016, by Val Rossman of Union City, Michigan. This page has been viewed 240 times since then and 12 times this year. Photo   1. submitted on June 16, 2016, by Val Rossman of Union City, Michigan. • Bill Pfingsten was the editor who published this page.

Editor’s want-list for this marker. View of narker in contest • Can you help?
Share this page.