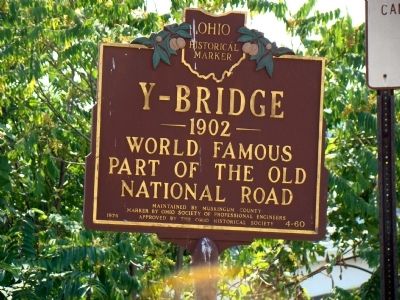 Location. 39° 56.423′ N, 82° 0.765′ W. Marker is in Zanesville, Ohio, in Muskingum County. Marker is on Main Street (U.S. 40), on the right when traveling south. This marker is on the eastern approach to the three-approach bridge. Touch for map. Marker is in this post office area: Zanesville OH 43701, United States of America. Touch for directions. 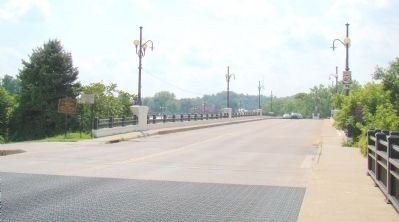 Regarding Y-Bridge. The intersection with Linden Avenue is on the bridge itself. The Bridge spans the confluence of the Licking with the Muskingum river.

Related markers. Click here for a list of markers that are related to this marker. The three Zanesville Y-Bridge markers.

Also see . . .  An Article About Zanesville Ohio’s Y-Bridges. This is the fifth Y-bridge built here. “While the [third] bridge was under construction [in 1832] a flood threatened the supports under the eastern span. Ebenezer Buckingham [the owner of the bridge company] hurried the completion of the work. Then he gave orders for the removal of the wedges which held the supports so that the flood waters could carry them 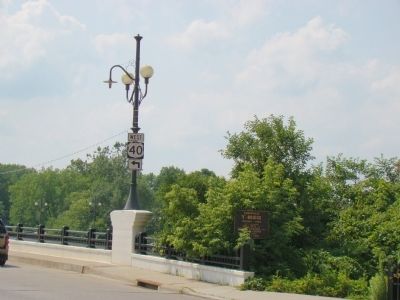 By J. J. Prats, July 11, 2008
3. Tablet on the Right Side
away without taking the bridge. When the wedges were removed, the span fell into the river and Buckingham and Jacob Boyd were killed by falling timbers. ” (Submitted on July 26, 2008.) 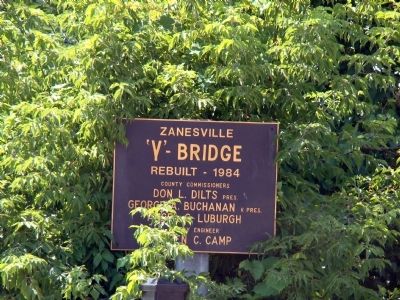 By J. J. Prats, July 11, 2008
4. Y-Bridge Marker
Tablet reads, “Zanesville ‘Y’–Bridge. Rebuilt – 1984. County Commissioners Don L. Diltz, Pres.; George A. Buchanan, V. Pres.; Ancel G. Luburgh. County Engineer Loren C. Camp.” Three of these tablets are on the bridge. This one, one on the western approach, and one at the intersection on the bridge. 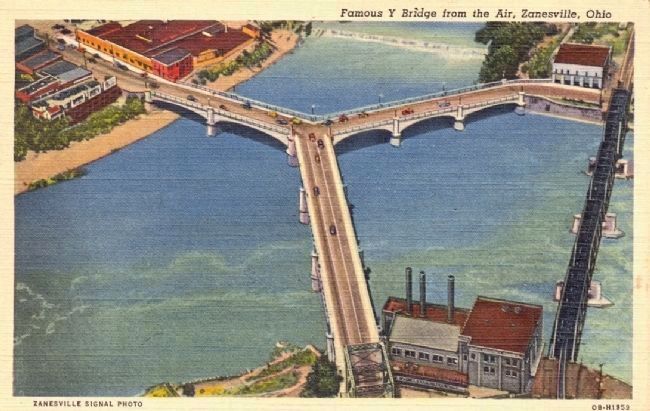 J. J. Prats Postcard Collection, circa 1944
6. Famous Y Bridge from the Air, Zanesville, Ohio
Postcard is marked “Genuine Curteich-Chicago ‘C.T. Art-Colortone’ Post Card” mailed in 1944. The view is from this end of the bridge. A portion of Zane’s Landing Park can be seen on the lower left. 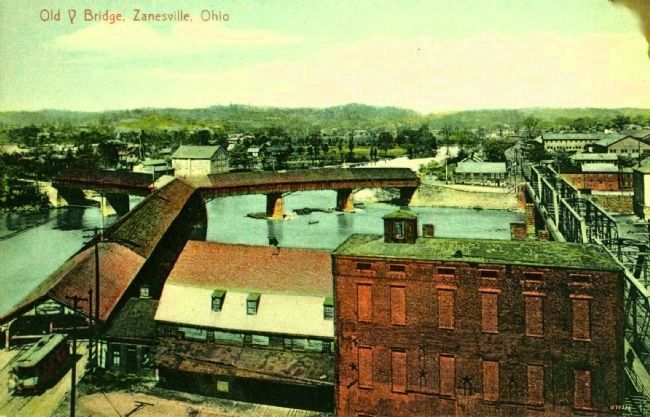 Postcard by Edmiston Book & Sta. Co., circa 1899
7. Old Y Bridge, Zanesville, Ohio
Taken from roughly the same location and looking the same direction as the preceding picture, this postcard view shows the third of the five Y-bridges built in this location. Completed in December, 1832, it was closed in January 1900 by the county because an engineering report had deemed it unsound and not fit for use. 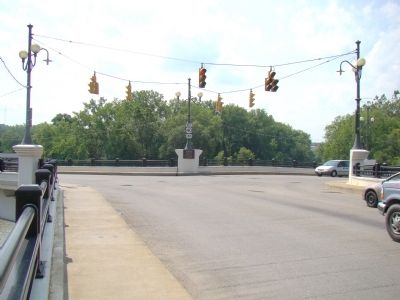 By J. J. Prats, July 11, 2008
8. Intersection of Main and West Main Streets with Linden Avenue
Linden Avenue goes right, West Main Street goes left and Main Street through downtown Zanesville is behind the photographer. One of the three tablets like the one in Photo 4 is below the US 40 West sign.
More. Search the internet for Y-Bridge.